Greg Rappleye is a poet of exquisite, lush language, exacting and precise in description, inventive in the re-creation of entire worlds. In this intoxicating and revelatory journey through the Brazilian rain forests of the 19th century, he populates the canvas of his poems with not only the flora and fauna of that time and place, but with the voice and inimitable perspective of its subject: Martin Johnson Heade, an American painter obsessed with the otherworldly appearance and flight of hummingbirds. As Rappleye’s imagined Heade confesses, “[I] walk for days to find their tiny hearts / beating in the jungle dark.” Yet for all its meticulous research, the heart of this book is a meditation on connection, on what we willingly give our lives over to. As the poet asks, “What should we save—/ a fallen world, or the life we are finally given to live?” —Todd Davis

In this gorgeous collection Greg Rappleye explores the crossroads of ecstasy and grief in poems about the painter Martin Johnson Heade. Rappleye brilliantly intertwines Heade’s voice with poems that range from Orpheus to Orson Welles in Brazil. In the great title poem Heade exclaims, “Oh, Christian missionaries, / trying to explain God’s lustful tropics!” and sings of his own longing: “For ten years, my beating wings, my heart-in-throat / warblings did not astound her.” This book, however, will astound you. —Robert Thomas

“Whatever land I drift toward,/ I sing for what lives there.” This book is a luminous singing, a reach forward for what lives in the intersections of art and the individual life. The core of the book is a series of poems about the life and paintings of Martin Johnson Heade, and the poems, like the paintings, are intricate, gorgeous and deeply, quietly felt. In range and scope this book is unique, though it harks back very strongly to Elizabeth Bishop, with whom it shares an interest in travel, in South America, in ekphrasis, in the rhythms and expansive possibilities of narrative. It is an achievement worthy of its subject. —Leslie Harrison

A young beauty in white [Eurydice] disembarks from a ferry [in Rio de Janeiro], is startled by a blind peddler. Her agitation seems naive, an innocent overwhelmed by the ubiquitous carnival drumming and the dangerous festive vibe of the swarming revelers in the harbour region.
—Lawrence Russell, Black Orpheus (2002)

Call the blind man in the first scene Tiresias,
after the sightless oracle
who knew the language of birds;
for that is his role when her boat nudges
the dock, not far from the Cathedral.
On his staff, he carries a spray of pinwheels—
green, orange, red—they could be
a bough of hummingbirds—spinning.
Eurydice flees the masked figure of Death.
Because he is a soothsayer, the blind man knows
this, and says, “I can feel your heart
beating—like a trapped bird.”
He gives her a necklace of honey flowers
To help her forget, and points the way to safety,
though she is soon lost among the dancers,
the fish mongers and butchers of the marketplace.
Our camera finds her, wandering near the bird sellers,
where ravens (for they, too, are Death)
crowd a yellow hummingbird, lying at the bottom
of a wrought iron cage. 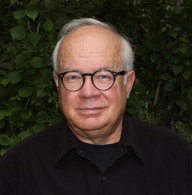 Greg Rappleye’s poems have appeared in Poetry, The Southern Review, Shenandoah, Virginia Quarterly Review, America, and other literary journals, and have been widely anthologized.  His second book of poems, A Path Between Houses (University of Wisconsin Press, 2000) won the Brittingham Prize in Poetry. His third book, Figured Dark (University of Arkansas Press, 2007), was first runner-up for the Dorset Prize and was published in the Miller Williams Poetry Series. His numerous awards include the Arts & Letters Prize for poems appearing in this volume, the 49th Parallel Award from Bellingham Review, the Mississippi Review Prize in Poetry, the Greensboro Review Prize, The Paumanok Poetry Award, and a Pushcart Prize. A former Bread Loaf Fellow, he is a graduate of the University of Michigan Law School and the MFA Program for Writers at Warren Wilson College. He lives in an old blueberry house just north of the Grand River in Ottawa County, Michigan, with his wife Marcia, their two younger sons and three dogs.  Retired now from the active practice of law, he teaches in the English Department at Hope College in Holland, Michigan.