Wind Farm – Landscape with Stories and Towers by Jeff Gundy

Wind Farm: Landscape with Stories and Towers explores the human and natural geography of the Illinois prairie landscape of Jeff Gundy’s youth, transformed long ago by the grid system of roads and ditches and intensive agriculture, and altered again by a vast wind farm. These deeply personal yet wide-ranging lyrical essays—whimsical, practical, and mystical, sometimes within the same paragraph—range across football and chicken farming, power grids and Mennonite history, folk music and mound-builders, set off by Gundy’s own photographs.  As industrial production of corn, soybeans, and energy becomes pervasive, and farmsteads and human populations among the towers dwindle, Wind Farm investigates the imagined past and intricate present of one small portion of the prairie, and glimpses possible futures for it and the planet.

These elegant essays are bound together, like pearls on a necklace, by two narrative threads—one about the author’s upbringing in a Mennonite farming family on the Illinois prairie, and the other about the prairie itself. . . . Jeff Gundy . . .left the farm for the classroom, first as a college student and then as a teacher, but he carried along from his rural upbringing riches of imagination that are abundantly displayed in these pages. —Scott Russell Sanders

Two cultures once made a living in the Midwest—native people from centuries back, white farmers from a generation ago—but little more than their artifacts remain. In this largely depopulated land, a crop of colossal windmills now grab at what cannot be seen. And that’s what Jeff Gundy does in this lovely collection: grabs at ghosts and echoes and rumors from the past and, occasionally, imagines a lush and more peopled future. —Kristin Ohlson

Wind Farm swirls with urgency, the poet dazzling us in prose that moves swiftly across time and place, a story that will not let the reader go quietly, peacefully, as the wind farmer meditates on a host of transgressions and graces, looking back across the miles to the west at the towering turbines that now inhabit the farm of his youth. —Todd Davis

Lyric memoir, prose-poem meditation on rural agricultural communities, fable of Anthropocene changes to the American Midwest—Jeff Gundy’s splendid Wind Farm or Landscape with Towers and Stories is all of these. . . .For a son and heir of the vanishing family farm, what does it mean to inherit the wind? —Elizabeth Dodd

“Cities, like dreams, are made of desires and fears, even if the thread of their discourse is secret, their rules are absurd, their perspectives deceitful, and everything conceals something else.”  ―Italo Calvino, Invisible Cities

The wind farmer lives hundreds of miles east of his boyhood home. He has only the most glancing, tenuous real-life connections to the wind farm. It sprawls across several thousand acres of land that was once the Illinois prairie, but has been relentlessly plotted, gridded, cultivated and planted, converted into an essentially industrial landscape. He owns one-seventh of forty acres there, thanks to his parents, and every spring he gets a modest check signed by his mother for the corn or soybeans harvested the year before. If he survives his parents, who are still hanging in there as he writes, he stands to inherit another forty acres or so, worth a tidy sum. He will never farm it himself.

The wind farmer wants to be Marco Polo, but he lacks a Kublai Khan, and is overly content spending almost every evening on the couch. His travels have been mundane, his best ideas mere shadows and imitations, his feelings sparse and parsimonious. Even his friends glaze and go vague when he starts in on either wind or farming. He would like to be Italo Calvino, author of a brilliant book about a fictional Polo and Khan, but nobody is interested in translating him, not even into wind.

The wind farmer has no clear idea how much money his brother, the last real farmer in the family, made last year. Things were bad, he heard vaguely, but as every farmer will tell you, things are usually bad. His brother’s combine cost more than the wind farmer’s house. There are enormous tractors and other implements, advanced systems to monitor yields and soil conditions, foot by foot, across the wide fields, and administer optimum doses of fertilizer, herbicide, and pesticide.

The wind farmer is white and getting old and knows that his generation has unforgivably squandered its best chances to keep the planet from crisping and drowning at the same time. He has absorbed numerous eccentric, eloquent books deconstructing the accepted logic of his culture and advocating for immersion in the enveloping life of the planet, the air and the land and the sky. He has spent his best days in classrooms, tossing such extravagant ideas in the direction of students who blink and nod, check their phones almost surreptitiously, and start packing to go before the time is up.

Home for Christmas, the wind farmer wandered around the home place and drove the country roads. Everything he saw was large and spread thin. The ditches were brown and dry, the fields empty, stark, flat, as if they’d been beaten out with a gigantic hammer, The white towers of the wind turbines stood distant from one another, staggered unevenly, none too close to a house or a road.

The wind farmer considered the investment of steel, copper, concrete, gravel, labor, paint, technical expertise, to build and maintain it all. He pursed his lips, contemplated intersections and affinities and metaphorical relations among the human, natural, and mechanical worlds. He pondered the elements hidden belowground, wiring and foundations, the tracery of connections linking each tower of the wind farm to houses and factories and enterprises in distant locales.

The wind farmer’s long-time friend and second most sympathetic reader sent him a flyer from her clean power company, which boasted that the electricity she now consumes is generated by a wind farm in Illinois. The wind farmer cannot decide whether to be pleased or troubled by this information.

His friend lives among worn-down Eastern mountains and forests and pernicious fracking enterprises, and has intimated more than once that the wind farmer lacks both seriousness and commitment. The wind farmer accepts her judgment and despairs of correcting his faults, but persists in his follies, scratching his beard, tinkering endlessly with a sentence here, a sentence there, full of doubt and inertia.

Even so, after years of sporadic, patchy research, the wind farmer has piled up fair-sized mounds of information and argument, and can’t resist imagining places he might inhabit within the great system of the Wind Farm. 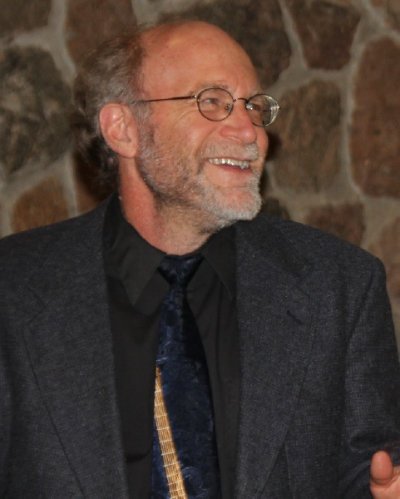 Jeff Gundy is Distinguished Poet in Residence at Bluffton University in Ohio. His twelve earlier books include Without a Plea and Abandoned Homeland (both poems), Songs from an Empty Cage: Poetry, Mystery, Anabaptism, and Peace (criticism), and A Community of Memory: My Days with George and Clara (creative nonfiction). His poems and essays appear in Georgia Review, The Sun, Kenyon Review, Forklift, Ohio, Christian Century, Image, Cincinnati Review, Terrain, and many other journals.  He served as Poet in Residence and held a Fulbright lectureship at the University of Salzburg in 2008, and was named Ohio Poet of the Year in 2015 for Somewhere Near Defiance. He regularly bikes the flat blacktops of northwest Ohio, often with his wife Marlyce on their bright yellow tandem, and writes and performs his own songs on YouTube and SoundCloud. He and Marlyce have three grown sons and six fast-growing grandsons.