What Are The Rich Doing Tonight? by Dennis Rush

“What are the rich doing tonight?” is a rhetorical expression asked by the working class in a moment of true living. Often, it is when experiencing something that shouldn’t be enjoyable such as hard, dirty work or simply surviving in difficult conditions. It is during these times that a realization occurs that the wealthy rarely put themselves in a moment of true living. That is the goal of being rich isn’t it? – to live comfortably? But what if living isn’t about comfort? In a moment of productive discomfort, a euphoria can strike when you realize that you have everything you need, including a story to tell. This collection is from those moments that remind us of what true living is.

“I read through these poems with pleasure. They’re witty poems, often moving and deeply real, with a clear music of understanding that seems to me quite original.  There is never a moment of obscurity.  The language seals the deal again and again, as in “Picking Berries,” where in the final stanza I smiled in agreement, thinking of this collection as a whole, with the poems as blackberries:  I wish I had another bowl.  Dennis Rush offers a feast here. Enjoy!” —Jay Parini

“In Dennis Rush’s new collection ‘What Are the Rich Doing Tonight?’ The answer might be that they are doing what many of us are doing…unable to sleep, worried for their children, or what tomorrow will bring. On the other hand the rich Rush talks about could be you and me, people who have worked most their lives on a 9-5 and get an afternoon to pick berries, a lifetime to be ourselves. There is a clarity of line and a steady hand throughout Rush’s poems that makes this unsteady world feel a little more secure and he threads the line of witness (to the self and others) without coming out on the other end a hero. A great feat in today’s atmosphere of heroic poetics. Instead, with Rush, one feels as if they have walked out of a dark wood and, like the poet himself, entered a long bright field that smells of cut hay” —Matthew Dickman

“What are the rich/doing tonight?”  This is the ending of “Siphoning,” a poem which begins, “I am draining my septic tank/with a garden hose.” It’s also the title of a new book of poetry by Dennis Rush, a name you should remember, for you’ll be hearing a lot more from him. William Carlos Williams famously said, “If it ain’t a pleasure, it ain’t a poem.” In this debut collection, Dennis Rush gives us the pleasure of fifty-one poems about work – the work of the heart and of the heartland, the dirt of field work and the grease of factory work, so whether you are rich or not, what are you doing tonight more important than reading this book? —J.R. Solonche

In Dennis Rush’s appealing collection we hear from a man who seems like Everyman but, like a Raymond Carver character or Italo Calvino’s Marcovaldo, is gifted with an atypical genius for transcendental wonder. Steeped in hands-on knowledge—whether berry picking or factory work—he bears no trace of self-pity or terminal discouragement.  On voting day he sniffs the tip of the marker, and reflects that democracy smells to him “like the first day of school.”  A deeply wise, yet often perplexed man, Rush has many riches to offer us.  These are charming, even stirring poems. —Alan Feldman

The poetry you’ll find in this exhilarating book emerges directly out of the facts described, rather than out of the language. That straightforwardness induces a sense of almost painful proximity and even a slight feeling of fear, because nobody here wants to ingratiate themselves with the reader. Many poets strive to make their writing feel fresh. The freshness here is in the absence of that striving. The writing creates a state of wonder by leaving out everything that’s unnecessary. That might sound easy to achieve, but it isn’t. In fact I would say these poems are radical. Not that they are avant-garde or experimental, or in any way difficult. They are actually radically lucid. They blow me away. —Mark Waldron

Day In and Day Out

This day was pulled
from the hamper.
As useless
as a jigsaw puzzle.
I’m reading about
California burning
and the Saudis
having their oily
fingerprints
on something evil
again.
So many people are in bed
with the devil.
Who’s my deal with?
I don’t have
a deal.
I consume.
I waste time.
Tonight, I will sleep
in this stale shirt. 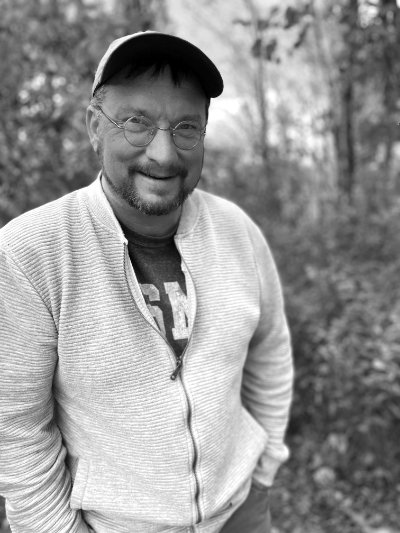 Dennis Rush grew up on a remote tobacco farm in Kentucky, and if a couple of things had gone better, he probably would have stayed and never written a poem. He is a graduate of the University of Nebraska at Omaha and Goddard College with an MFA in Creative Writing. He lives in Staatsburg, New York with his supportive wife, a few children and a menagerie of rescued animals.