We Slept the Animal by George Kalamaras

More than ten years in the making, George Kalamaras’s We Slept the Animal: Letters from the American West chronicles the author’s years of friendship and correspondence with fellow poets, artists, and other friends. Kalamaras locates this epistolary sequence of poems in the West, where he has both lived and spent long periods of time revisiting during the last forty years, particularly Colorado and Montana. This book pays homage to its precursor, Richard Hugo’s 31 Letters and 13 Dreams. The poems offer rich reflections of the living West, as well as an exploration of friendship and literary camaraderie. As in his previous collections, Kalamaras continues his ongoing project of “seeing one in the other”—giving us poems that explore the interaction of all things, particularly the interface of the human and natural world. Following his Surrealist forebears, he explores the complexity of language, with startling images and juxtapositions, as a vehicle for visionary poetics. These poems seek to connect our human impulses to the realms of the spiritual and the discursive. In the process, the poems honor the varieties of human and animal experience—mammals, marsupials, and the insect world, even probing the intelligence and “vision” that lie at the heart of molecules. We Slept the Animal also expresses an ars poetica, in part, in which Kalamaras maps the poetic process of his life of letters within the context of language, friendship, the geography of the West, and our animal selves.

We Slept the Animal is one of the most intensely populated books since Whitman—and yet, “We are made / in the image of loss,” Kalamaras reminds us in “Letter to Eric from Cripple Creek.” Like the Richard Hugo book which is precursor, we find poems and letters here, but addressed to a wider range, a vaster group of Americans, living and dead and to come. I know of no other book with this generosity, with this ambition so divested of ego. “I know what it’s been to step west,” Kalamaras admits, as The Rocky Mountain West, indeed the country as a whole, become populations engaged with complexity and love. There is mourning here, but even more celebration. —Bin Ramke

Anchored in the terrain of the epistolary tradition, the poems in We Slept the Animal are documents of the physical and mental landscape from which George Kalamaras’s work arises. To read this book is to unfold a road map that reveals “not just rivers but the words we’d one day speak.” This work is a love letter that gestures toward what it means “just to make a noise. Together. To belong.” And an epic that proclaims, “it is enough that the world comes in fragments upon the eye.” These contemplative, Surrealist poems originate “In the found / of the world,” and invite each reader to converse with “Places you tendered / and toughed into tongue.” —Andrea Rexilius

Letter to Ray from Livermore
for Ray Gonzalez

Hey Ray. We know Breton and Desnos are dead,
though not in our poems. I was thinking today
how we love the West. The real West where railroads
speak. Everything now is air. Rush here, fast there.
Our molecules jiggle enough as it is
when we microwave our food. That baked potato
I ate last night still striving inside me to survive.
Of course you’ll visit in July and sleep
with your head to the north, aligning yourself
with the pines. You remember growing up
on the border with scorpions, the desert
and its sting. I recall Indiana fire ants
in the pump-house ivy. My boyhood
bites. John says they’re in my wrist.
And I believe him, standing some nights as I do
like the guy in Un Chien Andalou, staring
at my hand. I know. The wrist is not my hand,
but like those railroad tracks, our veins keep wending
west. Each year for me from Fort Wayne to Livermore.
I don’t know, sometimes, how we’ve survived this long
with a moth wing for a mouth. Something is beating me
back, and I’m sure it’s me. Part fly, part sky. You named it
Luna and started a magazine. You got the night
just right. I’ve gone inside, my eye open to the spiritual
fly. Buzz here. Land there. Let the breath
and with it the jittery monkey mind release.
It’s surprising we still have wives, the way our parents left
one another with pain. We’re not unique. Someone
is always throwing someone out, even with a word
or curve of earth. Someone is always throwing
a bone to the dog. In your case, cats. Remember
when Punk and Whitey loved to eat cantaloupe,
as far back as Arvada? God, we’ve known each other
a long time, even before them, in Denver,
knowing what makes our secret strain
exact. When Desnos sleep-talked, he threw a thread
of speak that wound from the cosmic now into the lives
of human dread. That’s why they were scared
and barred him from the group. So there are strains
of purpose and strains of pain. Which brings me
to how you and I do. Which brings me back
to those two rails running west
and all the courage of the plains. Of course,
Richard Hugo could be a sap. And he knew it.
But he stands naked, letting the wind. Like blood
into a cup, it pours out his mouth. And the trees
speak. Not only booze, dark bars, and shame,
but the hope of how to survive in Red Lodge,
Missoula, or Butte. Desnos knew this
too, stumbling back from the camp, typhus
bleeding his skin, swelling
his spine, the Second World War
pouring out through his teeth. As did Breton,
by the time he got to his third wife. I love them most
for their blurring and slurring of word. The how and why
my life. As we love Hugo too, perhaps most
for his shame in how the West was won
and keeps losing itself in the lost. Because living here
is pine-dead hard. The how and why we cry. 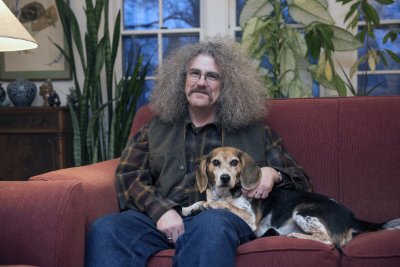 George Kalamaras, former Poet Laureate of Indiana (2014–2016), is Professor of English at Purdue University Fort Wayne (formerly Indiana University-Purdue University Fort Wayne), where he has taught since 1990. His ten books of poetry include Luminous in the Owl’s Rib (Dos Madres Press, 2019), Kingdom of Throat-Stuck Luck (2011), winner of the Elixir Press Poetry Prize, and The Theory and Function of Mangoes (2000), winner of the Four Way Books Intro Series. He has also published seven poetry chapbooks and a book of critical theory, Reclaiming the Tacit Dimension: Symbolic Form in the Rhetoric of Silence (State University of New York Press, 1994). He is the recipient of numerous grants and awards, including a Creative Writing Fellowship from the National Endowment for the Arts (1993) and two Individual Artist Fellowships from the Indiana Arts Commission (2011 and 2001). During 1994, he spent several months in India on an Indo-U.S. Advanced Research Fellowship. He lives with his wife, writer Mary Ann Cain, and their beagle, Bootsie, in Fort Wayne, Indiana.