Unwinding Alphabets: a Book of Citations by Donald Wellman

Reading inspires writing. These poems employ stratospheric levels of quotation, imitation, and allusion so as to create a serial poem or indeed serial poems within a serial poem. The first series, “The Generosity of the Dead” is a close reading of the works of Lisa Robertson. Citations from her works supply the fabric for this series. Other poets are cited for the sake of the argument. The second series, “Alphabet Poems,” works with a letter or letters of the alphabet derived from the first names of a range of chosen poets. The selected allusions are often a product of whim. The result is not. Among the short sequences and individual poems that comprise the remainder of the work are two hybrid poems, one indebted to Hölderlin and the second based on the work of Ingeborg Bachmann, a poet who felt disabled by the horrors of life after World War II.

“I’ve read Unwinding Alphabets: a Book of Citations  and I think it is thrilling work. The methodology is superb but more than that these poems sing, vibrating along lyric strings of colloquy and antiphony. You’ve done something really fine here.” —Patrick Pritchett

Citations, at least as Don Wellman does them, are acts of ritual remembrance, the poet gathers the living and the dead through a discrete bibliomancy. Wellman gathers up his own life as well, through invoking the lives of others. All called into the fulfillment of the present by the spell of letters. These poems, thoughtful, moving, vivid, and musical, draw poetry from its deepest sources. They fill the air around the reading of them with personal warmth.” —Joseph Donahue

Don Wellman’s Unwinding Alphabets is a freshly literary work, evoking a specific “meanwhile” of layered interfaces. In a reflecting, assessing mode, Wellman attends to the provocative poets on the map he draws of his “company.” This choice of poets (Lisa Robertson, Ingeborg Bachmann, and Hölderlin) and his affirmative examinations of others generate his exacting and fascinating cultural assessments, in which speculative poetry and philosophical speculation confer. In this book, Wellman seeks a new cultural compact. —Rachel Blau DuPlessis

For a good many decades Don Wellman has been breaking exceptional new ground in American poetry.  In this collection—an homage to poets and poetry, to making and exploring—Wellman continues his quest to “make it new.” In each of his poems he both comments and expands on how saying may be said, how poetry can function as a catalyst for a plethora of personal associations. Memory and desire, worlds in time and space, understanding and not understanding are all laid bare in these pages. My own homage to Wellman is to reuse and slightly alter the words he writes in his poem for Antonio Gamoneda:  I sing your brilliance / your insistence that poets avoid explanation. / I resolve not to add a word to your meaning. —Christopher Sawyer-Lauçanno

Books upon the table. Bookshelves line walls.
Honeycomb the hive. Windows too are books,
now open on a summer meadow. A soul
slips over waterfalls and silken pillows,
canoes moored on banks of slow philosophy
where acolytes theorize reciprocity. My sister self,
your castanets trace arabesques. Stairs whisper
refrains to stones laced with greeny moss.
Bannister troughs host rivulets of marigolds.
A star rises among stanzas of doubled rhyme.
My peasant child, my Columbine, follow me,
the shepherd cries, to a land upside down
of mushrooms and acorns. Lament, for this day
a poet closed his book! His lyre floats away.
His coronet no longer sounds. His chaplet
withers, Orpheus, undone by sad measures.
Shepherds and daughters of Arcadia, know how
mares foal and ewes give milk without aid
of aimless meter. Instead couple as couplets do.
The pollen of the butter cup is your sweet suck! 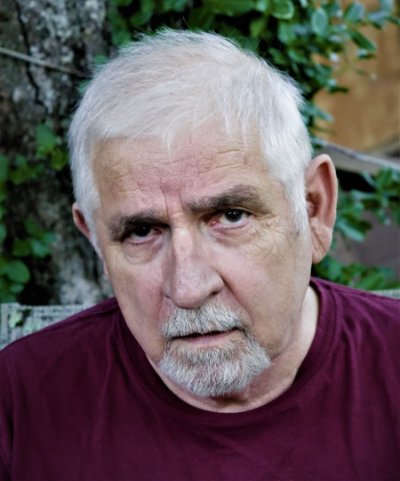 Donald Wellman is a poet who lives in Weare NH. He has recently been seen skulking through outlying districts of Spain and Morocco. Wellman has nine books of poetry to his credit. He translates from several languages, German and French as well as Spanish. Originally a medievalist, his academic expertise lies now in twentieth century and contemporary poetry and poetics. His research and scholarship have concentrated on the works of Ezra Pound, William Carlos Williams, Charles Olson, and figures associated with Black Mountain College. He writes on transnational literature, including the literature and culture of the Caribbean. At Daniel Webster College, where Wellman was a Professor of Humanities, he taught Creative Writing, History of Modern Art, World Literature, Caribbean Literature and a Seminar on Censorship and Self-expression. The college closed in 2017.

Wellman’s work first came to the attention of the international poetry community with the publication of O.ARS, 1981 to 1994, a series which published anthologies of poetry, visual poetry, experimental prose, criticism and commentary. From its inception O.ARS published literary works associated with the international avant-garde, as well as the poetry that has come to be known as language-centered writing. O.ARS is strongly identified with poetry and poetics in the Black Mountain College tradition. Notable volumes include Coherence, Perception, and Translations: Experiments in Reading. Throughout its history O.ARS received financial assistance from the Massachusetts Council on the Arts and Humanities. It has been collected by major university libraries throughout the world.

In both poetry and prose, Wellman’s work, as scholar and as poet, engages a field poetics, using tropes like margin, frame, or overlay to explore the ways in which cultural hybridity and liminality produce meaning. His poetics derives from Charles Olson’s practice of open field composition and explores the phenomenology of perception. Wellman’s Albiach / Celan: Reading Across Languages (2017) engages translation as an act of reading that helps to reinvent the relation between the home language and the language being translated. Editing O.ARS, 1981-1993 (Among the Neighbors, The Poetry Collection of the University Libraries, University at Buffalo) was released in October 2018. Wellman’s Expressivity in Modern Poetry was released by Fairleigh Dickinson Press in 2018. This study draws heavily on the influence of poets in the Pound-Williams-Olson tradition as seen through a lens provided by the philosophy of Gilles Deleuze and his Spinozistic theory of immanence.