The Road Itself by Aralee Strange

While widely published in literary journals during her lifetime, The Road Itself marks the first overview of the late Aralee Strange’s poetic works. It is a tour de force that moves from the urban blight of 1980’s Cincinnati Main Street to the pastoral solitude of Adams County, OH to the Southern charms of Athens, GA while remaining forever rooted in the heart of America, exploring in equal measure the implied complexity of its inherent beauty and tragic flaws. Her unmistakable, even voice simultaneously pitched between Old Testament scripture and The Street, these tough, restless poems aspire to and attain a clarity of language and personal spirituality. Included in The Road Itself is her seminal poem cycle, “dr. pain on main,” which captures the total fabric of city life, its complications and many textures, as well as the meditative poem-psalms that she composed on Peach Mountain in Adams County, Ohio that led Strange to write and direct her feature film, This Train. The Road Itself also includes art by Jay Bolotin, Frederick C. Ellenberger,  Kathy Prescott, Michelle Red Elk, Art Rosenbaum, Mary Seguin  and Jim Wainscott, each piece inspired by Strange’s life and work. Edited and with an afterword by Mark Flanigan, and with a foreword by Pauletta Hansel, the poems in The Road Itself seek truth in all of its hiding places, much like its author.

The poems in The Road Itself are a tribute to both the poet who penned them, Aralee Strange, and to us, the readers who Strange invites through her words to take off your clothes / and put on this robe / and I’ll show you around. Her “pain” series plops the reader smack dab in the middle of urban America. It possesses poignancy without indictment, immediacy without panic. It evokes awareness in a way few collections do. All of the poems on these pages, which include homages and lyrics alongside social commentary in its varied forms, are densely braided, yet accessible, replete with unerring rhythm, song, and an almost Whitmanesque joy de vive. Strange’s skillful use of minimal punctuation and anaphora throughout creates heart-pounding urgency that propels the reader through the sometimes-difficult terrain of Strange’s no-holds-barred poetic concerns. The Road Itself is a collection for everyone now and for years to come. —Grace Curtis

It is a rare gift in this life to happen upon a singular voice, a voice that stands apart, bright and unassailable. It is rarer still to discover that voice belongs to a mysterious neighbor who lives a few blocks away. I’ll never forget the first time I encountered Aralee’s words in a recording of her “film for radio” Etta Stone. It was no different than a first discovery of Dylan Thomas, or John Coltrane. Life would never be the same. And who can forget the first time they heard Aralee’s speaking voice, so full of music and lost songs, soft spoken ghosts of the South, smoky with the weather of whiskey, wry wisdom and a weary contentment. Aralee’s gifts were luminous and considerable, and yet she was quick to befriend and encourage other writers and musicians, anyone feeling the gravitational pull of creativity. She is deeply missed and yet she lives on in her words, and in the lives of those of us who knew her. Were changed for the better by her. Loved her. And I can still hear her voice in the chorus. —Linford Detweiler

Aralee Strange was always a generous spirit and a generous writer to lots of people, both young (as I was when I met her), and not so young. Her work was then, and is now, impatient, loving, and full of vinegar, risky in its wingedness and ferocious with speed. In one fell swoop, she can kick-out-the-jams-motherfucker and connect the glittery dots: “All poets are crazy”—yes, indeed—the really good ones at any rate. Aralee Strange was Dionysus, Calamity Jane, Hank Williams, and Arthur Rimbaud all rolled into one—a punk rock-country-avant-garde-city poet, the guardian angel of Main Street, and most assuredly a person of interest (all senses). This book is a testament to that, but also to her nerve and seemingly limitless compassion, her commitment to poetry and people and revolution—to showing up, mouthing off and paying extra close attention. —Matt Hart

The Road Itself rambles through a singular poet’s life and distills the world through her unflinching gaze; its author taking her own measure and the world’s without romantic filters. A 2 a.m. prophet, Strange declares to America, the mean and beautiful, I am an alarm clock / and I am ringing. Even so, there is the medicine of dirt and train song; there is the bandoneon and the saxophone; there is Strange, inviting you, step into the center / shall we dance?” In her life, Aralee drew a circle wherever she lit and pulled in poets from every which way. She offered courage and a platform for many writers, seldom taking front-and-center. In The Road Itself, old admirers and new readers can be immersed in her work, which smells of French cigarettes and Wild Turkey 101, swings like Mingus and the tango. Strange’s voice is like whiskey rumbling over a creek bed. Take care for her poems are blade-sharp and burn clean. Can you hear the train? Hurry, come get your seat. She’s about to begin. —Michelle Castleberry

If anybody can save this world she’s a woman
and is she pissed
pre-fabricated domesticated deformed and suppressed
underdressed depressed obsessed with herself
seduced made ashamed and treacherous
made less.

And she will ask:

How if we waste the children who will lead us
shall we endure?
Why must they atone for the sins of the fathers
who sacrifice to their false gods all life
for the sake of pride and poor judgement
for who owns what
who own nothing
who know nothing
who would have us murder and destroy
them and how many of us
to save face
to prove whose god is great
who owns the night
whose mighty fist is biggest?

And she will say:

Let my will be done
for a change
my ways my means
my benevolence my praise
my rage
my rage. 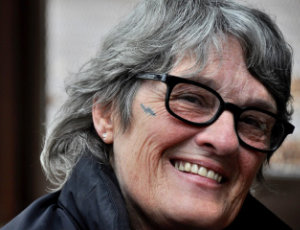 Aralee Strange, a poet and playwright, was born on December 5, 1943, in Macon, Georgia, from where at a young age she moved to Birmingham, Alabama. After living and working in Atlanta, Georgia, Cambridge, Massachusetts, and New York City, New York, Aralee then settled for more than twenty years in Cincinnati, Ohio. In March 2007, she moved to Athens, Georgia, and lived there until her passing on June 15, 2013.

Strange’s body of work includes Etta Stone: A Film for Radio (1990), which she wrote, produced and edited at WGUC in Cincinnati and which was aired nationally on National Public Radio stations; dr. pain on main (1991), a play based on her series of poems by the same name, commissioned and produced by Cincinnati Playhouse in the Park; The Chronicles of Plague (1992), a play commissioned and produced by Ensemble Theatre of Cincinnati; An Evening at the Sad Cafe (1995), directed scenes from her screenplay This Train, performed at Ensemble Theatre of Cincinnati and at the Carnegie Arts Center, Covington, Kentucky; and This Train (1996-2001), a feature film she wrote, directed and edited.

At heart, the core of Strange’s legacy as a poet is equal parts inspiration and inclusion, which goes a long way in explaining the effect of her passing away had on so many varied artists. Shortly after her death in 2013, celebrations of her and her work were held in both Athens, Georgia and in Cincinnati, Ohio. Between the two cities, over a hundred writers, actors, poets, visual artists and musicians gave new breath to Strange’s words, played audio of her reading her work, wrote poems for and about her, and displayed artwork that was inspired by her. In April 2016, Strange’s film This Train—the backbone of which was many of the poems in this manuscript—was central to a successful program at the Aronoff Center for the Arts titled “Present Tense Imperfect: Two Evenings of Spoken Word, Film, and Music.” All of which are just a handful of examples meant to illustrate the extent of Aralee’s continued presence in multiple artistic communities that span varied disciplines.

Although Aralee may have moved on, her voice continues to resonate and will continue to as long as there is need for someone to champion the underdog, the underserved, and the unappreciated with a take-no prisoner attitude combined with a gentleness of spirit. Or, as Aralee Strange spells it out in these pages, “teeth in the real/saying grace.”

Includes:
Aralee Strange, performing “Genesis,” “some are born savvy” and “spelling it out” at the Contemporary Arts Center as part of the “Spoken Word/Broken Word” program presented by the Weston Art Gallery’s Extended Play Intermedia Series, March 26, 2004, Cincinnati, Ohio. Recorded by the Weston Art Gallery. Mixed by Barbara Wolf. Edited by Barbara Wolf and Mark Flanigan.

Aralee Strange, performing “Big Her” at the eco*art*lab at The Bottleworks, Athens, GA, March 29, 2013. Recorded by Matt DeGennaro.

The launch of The Road Itself Audio will be marked by a series of events celebrating the poetry of Aralee Strange, with readings from the book by poets and performers who were friends of Aralee.

This project was supported in part by the Ohio Arts Council, which receives support from the State of Ohio and the National Endowment for the Arts.