The Lost Notebook of Zhao Li by J. R. Solonche

When J.R. Solonche published The Five Notebooks of Zhao Li in November of 2021, Kirkus Reviews called it an “intriguing set of philosophical poems…a novel in verse [that] offers a glimpse into the most personal thoughts of a creative thinker.” Filled with more of the wise, witty, profound, silly, thoughtful, thoughtless, koan-like musings, The Lost Notebook of Zhao Li can be considered the sixth and final chapter in the tale of this 75-year-old poet/philosopher, who if asked which one he is, would answer: “Both, but not at the same time.”

These short poems are an extraordinary amalgam of wit, close observation, humor, and clear-seeing. Each one singles out and illuminates an ordinary moment – ordinary, that is, until the poet explodes into a miniature epiphany. Easy of access and frequently profound, J.R. Solonche’s poems induce in me a state of delighted surprise. —Chase Twichell

The tone is established from the outset: wry, wise, sardonic and playful, drawing the reader irresistibly in. Solonche is revealed as a philosopher in the mould of Wittgenstein: aphoristic, charismatic, acerbic and oddly mystical. If you met this book in a bar, you would definitely want to take it home with you and every day thereafter congratulate yourself on how lucky you’ve been. But that is true of all his books. —David Mark Williams

The poems of J.R. Solonche catch the reader off-guard in playful profundity. While always mindful of the tradition of poetry masquerading as direct statement (the like of W.C. Williams, Robert Bly, Robert Creeley, and Charles Bukowski), J.R. Solonche nevertheless “makes it new” through his masterful use of understatement, aphorism, word play and anaphora – raising poem after thoughtful poem from the familiar and often overlooked “little things” of the poet’s day-to-day encounter with the world. —Phillip Sterling

Zhao Li opens the literary magazine. Most of the poems are mediocre. Some are all right. Only one has a body and a soul that belong together. Zhao Li smiles.

Zhao Li looks in the mirror. He remembers his promise not to look in the mirror unless he is shaving. “What a silly promise,” he says.

Zhao Li thinks about growing a beard. Then he dismisses the thought. “If I grow a beard, I shall have to marry the first woman who says she likes it,” he laughs.

Zhao Li pauses by the Virginia creeper. “This is the fastest creeping I’ve ever seen,” he says while pulling up the vine that has crept right up to his door. 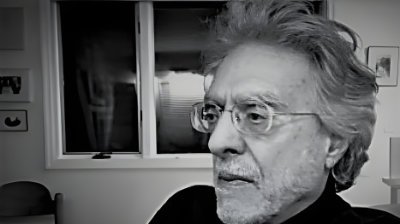