The Gospel According to Judas by Keith Holyoak

Mysterious emails pleading for help—after twenty centuries, Judas Iscariot has been resurrected—as a poet—and wants the world to hear his story. His recollections of his days as an apostle are blended with meditations on love and friendship, on betrayal, remorse and forgiveness. Speaking sometimes in his own voice, sometimes assuming those of Jesus, Mary Magdalene and others, Judas grapples with the complexities of spiritual life and the human condition.

Rich with allusions to Scriptures across the canon of world religions, together with historical sensitivity and imaginative insight, Keith Holyoak’s Gospel According to Judas offers us a twenty-first century Everyman. He is painfully and persistently honest, occasionally hesitant, yet wedded to the urgency of the religious quest. His voice is true and – in Keith Holyoak’s rendering – almost unbearably precise. —Bruce Chilton, author of Rabbi Jesus: An Intimate Biography

Keith Holyoak has a fine ear, and his poems resonate in the reader’s head, creating memorable language as he writes in the voice of Judas, who has now returned with fresh words. I like the inventiveness at work here, and the richness of texture from the Borgesian introduction to the echoing (and often allusive) poems themselves. —Jay Parini, author of The Art of Subtraction: New & Selected Poems

Keith Holyoak has constructed an ingenious and daring remake of the Judas story. The Gospel According to Judas is a brilliant display of poetic skills, spiced with the flavors of Nabokov’s Pale Fire and Jorge Luis Borges’ erudition. One need not be a Christian to partake in this sumptuous banquet, the table set with offerings from religion, philosophy, and human psychology. Holyoak is steeped in tradition while simultaneously viewing it from high above with the eyes of an eagle. His language is clear and lucid, with passages that approach the sublime. —Koon Woon, author of Water Chasing Water

Surfing the Internet today I hit
Upon a top-ten list of evil men
Through history. I checked the names on it,
Fearing I’d find my own. Idi Amin
And Vlad Dracul rub shoulders there with Hitler;
Two spots reflect the glory that was Rome—
Caligula, teamed with Nero the fiddler.
Attila the Hun—he looks right at home.
Ivan the Terrible and Joseph Stalin
Made Russia quake; Pol Pot’s got hell to pay.
Tomás de Torquemada, holy Christian,
Surely deserves his own auto-da-fé.

“Top tens” are always slightly arbitrary—
King Leopold might well have made the list.
How many men did Alexander bury?
Genghis Khan and Mao were somehow missed.
Pope Urban II started the Crusades,
Jerusalem of course the best excuse;
The massacres by Christians on those raids
Helped reconcile the Muslims with the Jews.
And Judas? I don’t really fit the bill—
My deed was too allusive, far outdone
By those who relished multitudes to kill.
I never slew a man (worst case, just One). 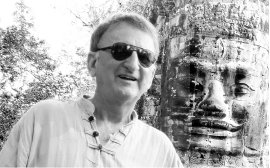 Keith Holyoak was raised on a dairy farm in British Columbia, Canada. With degrees in psychology from the University of British Columbia and Stanford University, his scientific work focuses on the nature of human thinking and its basis in the brain. He has been a recipient of a Guggenheim Fellowship, and is a Fellow of the American Association for the Advancement of Science. Currently he is a Distinguished Professor of Psychology at the University of California, Los Angeles.