The Facts at Dog Tank Spring by Andrew Schelling

The Facts at Dog Tank Spring is Andrew Schelling’s first book of poetry in seven years. Following his folkloric study Tracks Along the Left Coast, his new book speaks largely to an American West lying inland: the Indian Peaks, canyons and ranges of the Colorado Plateau, the Arkansas and Apishapa rivers, the Sangre de Cristo range. Schelling’s immersion in the traditions of Europe and Asia are evident, with echoes of Shakespeare, women poets of old India, and classical Chinese verse. He salts poems of love and companionship with grieving words to deceased friends, fury at ecological damage, or mischief surrounding riddles and the origins of strange words. As in previous books he keeps to the oldest charges of poetry: to converse with the dead, to cock a skeptical eye on the overhead stars, to invoke the fertility of animals, to record the present era with a touch of humor as it passes. In the end, past the poems, it is the land that is “Tao te Ching / and Farmer’s Almanac crunched by three / billion years into one granite treatise.” The Facts at Dog Tank Spring holds the historical range and ecological conscience of all Schelling’s poetry, essays, or translations.

When I pick up a book by Andrew Schelling, I expect it to be a red clay pot buried in pine needles. I know it will hold within it everything that has occurred in the lands surrounding, the flick of the weasel’s tail and the cry of the kestrel, the tender lack of friends gone on ahead, and the wisdom of many cultures. These poems seem written not by hand but by heart. Listen to the oldest / of books. —James Thomas Stevens

I genuinely enjoyed this manuscript and will enjoy it even more once it’s a real book in my hands. There were at least ten poems that gave me the thing I’m looking for (what that is I couldn’t say). The Facts at Dog Tank Spring is less a book than a world: Rockies and Himalayas, humans and bears, Youtube videos and pictograph panels, deep past and blossoming present. As Andrew Schelling puts it in one poem, “Life looks bigger.” That’s true, and that’s a relief. —Leath Tonino

Catullus, himself notably
indiscrete, says some things
should only get written
on water

Firewood arrives from Granby,
all of it lodgepole, all of it beetle-kill.
Local pines
reclaim their ground where the Black
Tiger Fire once burnt

We all leave traces where we’ve passed.
spindly tracks
ciphers inscribed about the post,
right where the bark’s been scraped—
telling old escapades, romance,
now make a better story
than most. 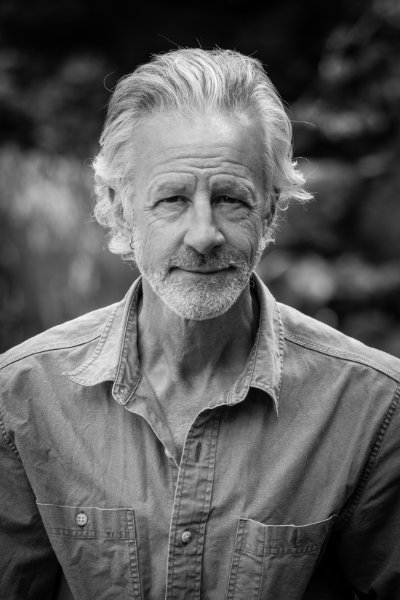 Andrew Schelling, poet and translator. Author of twenty-odd books including From the Arapaho Songbook and The Real People of Wind & Rain. In the 1970s studied classics with Norman O. Brown and ecology of mind with Gregory Bateson at U.C. Santa Cruz, then up to Berkeley for Sanskrit while editing samizdat poetry journals. In 1990 he moved over the Continental Divide to the Front Range of the Southern Rockies with wife and daughter. Has worked on land use, wolf reintroduction, defiance to dams, protection of wilderness. Eight books of poetry translated from Sanskrit & related tongues. His study Tracks Along the Left Coast: Jaime de Angulo & Pacific Coast Culture is a folkloric account of bohemian poets, old time West Coast storytelling, natural history, cattle rustling, & linguistics. Many years teaching poetry and Sanskrit at Naropa University, he lives in the mountains west of Boulder, Colorado.