Look inside the book to see a preview of the illustrations and poems.

“. . . (a) visual / poetic collaboration, inspired not only by the Egyptian Book of the Dead but by the medieval tradition of the Très Riches Heures and the illuminated books of William Blake. The sheer range of forms and styles is breathtaking, . . .” —Norman Finkelstein

Note: Although Dos Madres Press is not the publisher of this book we felt it fit into our catalog and so we have partnered with the authors to offer it to the public.

Purchasers of The Blue Chip City Book of the Dead will receive a copy of The Wonderful World & Other Poems by Steven Winhusen at no additional cost.

The Blue Chip City Book of the Dead playfully takes the famous Egyptian text as its basis. The original book of Going Forth by Day provides a collection of chapters and prayers appropriate for progression through the chaos of the underworld.  The Blue Chip City Book of the Dead’s attention deficit narrator navigates post-modern life by its byzantine rules and regulations in his search for promotion.  Lavishly illustrated, the text and the imagery work together as one.

In The Blue Chip City Book of the Dead, the Brothers Winhusen (graphic artist Joe and poet Steve) have created an ironic homage to the (under)world of the contemporary quotidian, the quotidian that prepares us—or  fails to prepare us—for the passage into an afterlife which may, come to think of it, exist solely in the present moment. Stunningly designed and executed, this visual / poetic collaboration, inspired not only by the Egyptian Book of the Dead but by the medieval tradition of the Très Riches Heures and the illuminated books of William Blake. The sheer range of forms and styles is breathtaking, and is all the more impressive for the grandly coherent whole into which those forms and styles merge. The ghosts of Samuel Palmer and Wallace Stevens flit through a post-Great Recession soulscape disaster: “O Dark one, No one saw it coming.” Too late: we have to follow Joe and Steve to the end of their beautiful nightmare. —Norman Finkelstein, Professor of English, Xavier University

The Blue Chip City Book of the Dead by Steve and Joe Winhusen is a challenging book of images and text. It is a savory stew of narratives wrapped in dualities and puzzles for the reader/viewer. The images are storied places where space is always ambiguous, and dark and light in complementary hues are main characters. The text, in poems and brief stories, moves meaningfully between the mundane and the holy, the street and the gods, reality and mythology. The images and text play off one another just as the poems within poems do. The structure of the book, and the pieces included within it, allow the reader/viewer to roam freely, finding many rewards. —Gary Gaffney, Professor Emeritus, Art Academy of Cincinnati

The almost
Instinctual bonfire
Nightfall inaugurates
Now the leaves
Burn easily
The excuse
For gathering
Branches, sticks
Stalks, twigs, logs
Brambles, family
Friends, neighbors
Even strangers
The gut sense
Each perennial
Guest feels
For the need
To burn
The burn
Said to scour
Solid yard-waste
Rubbish, trash
And deadwood
From its carbon
Backbone
And leave behind
Clean ash
The fiction
Of living leaner
More unfettered
Even better
Not untouched
But intact
When everything
Except yourself
Is scorched 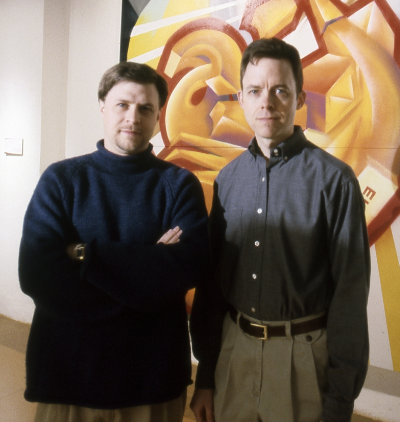 Steve and Joe Winhusen are brothers native to Cincinnati. Joe is an artist with an MFA from the Art Academy of Cincinnati. He currently lives in Indianapolis where he teaches art. Steve is a family physician on the West side of Cincinnati. He resides there with his wife April and son Daniel. He is also the author ofThe Wonderful World and Other Poems.