The Blue Canoe of Longing by Margot Farrington

Here are visitations to take us by surprise: advances of the supernatural into daily life, and journeys actual or imagined that shock or soothe by depth of inquiry. A dragonfly serves as guide, a leaf poses as lover, a room transforms into night museum to hold the day’s mental acquisitions. Chekhov gets summoned to Brooklyn; Burns repeats advice near meadows of milkweed. Physical labor occurring within old dwellings offer paeans to the past, juxtaposed against explorations of expulsion and homelessness. Here one finds scenes lit solely by lightning or observations by the unborn that invite us by turns to refuse and accept what it means to be mortal. —Margot Farrington

“Margot Farrington’s The Blue Canoe Of Longing is a delightful read.  Our appetite is stimulated by her opening poem “Conception In May”, and further enthused by her erotic metaphors in “Wine” and “Sharing Mussels.” In this collection, stories and inner emotions find exposure through such tasks as wallpaper scraping and wall demolition, while others provide meditations on touring a house in foreclosure or drinking tea while observing deer.  Each poem reveals layers of mystery and yearning. There exists humor and wisdom, reflections and conversations drawn from plants, insects and animals, or yet again through myth or the media. With her careful and enduring sweep, we perceive.”  —Anna Yin

“I sensed an opening and/made my move,” declares Margot Farrington in her opening poem about May having been the only month in which she could have been conceived.  And boy, does she ever make her moves in the poems that follow, crafted pieces, many carrying extended alliterations and rhymes, many uttered in an actor’s intense voice.  These are poems that beg to be read aloud. But the tour de force of this collection is how it embodies longing’s recurring nature. It’s this poet’s work, as she shows in her “Wallpaper Suite” where she soaks and soaks, then strips away layers, only to find traces of stencil ink in the wallboards below.  It’s part and parcel of her style, as lightning and lockets, mirrors and mice, bedframes and headboards and birds, birds, birds appear and reappear throughout.  Get into this canoe.  Enter these poems. Farrington’s search will carry you more deeply into your own.” —Moira Linehan

I must’ve known May was the only month I
stood a chance to be conceived. People’s coats
came off, the lindens lifted bicolored bouquets
while the mockingbird married ecstasy
on the highest aerial of the neighborhood.
Laundry flirted along the lines—a pair of panties flew off
while the rest swelled with innuendo. A handprint
preserved in cement beckoned me on.
Smokers sensed my drift by way of their exhalations.
In the subway, a rat ran along
with a piece of paper held in its mouth as all who saw it
pointed and laughed without a trace of fright.
Outside the air was buxom, fragrant where
flowers ruled, their scent elusive among
taxis who drove in pursuit, fast then slow.
A couple kissed at an intersection, the synchronized
streetlights greened. Pollen blew goldenly over
exhaust. I sensed an opening and
made my move. 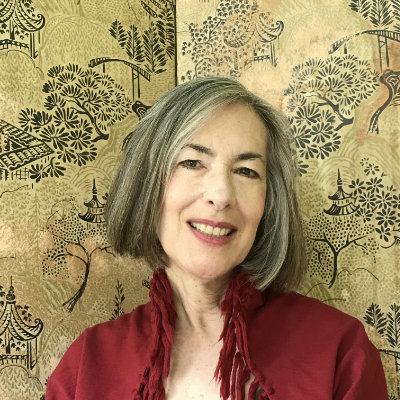 Margot Farrington is a poet and performer whose work encompasses traditional and experimental modes. Her previous books are Rising And Falling (Warthog Press), Flares And Fathoms (Bright Hill Press), and Scanning For Tigers (Free Scholar Press). She has read and performed nationally, and abroad in France, Great Britain, Wales, and The Netherlands.  Additional published works include essays, interviews, and reviews on poetry, art, gardening, and other subjects. Farrington is founder and director of Writers At The Eyrie.