Something That Belongs To You by Roald Hoffmann

There emerges in Something That Belongs to You a story of survival and memory, of complex Ukrainian-Jewish relations, of struggles to remember and forgive.

At the center of the play are an 81-year-old Jewish woman, Frieda Pressner, and her son Emile. The action is set in 1992 in Philadelphia, where Frieda lives with the adult Emile, his wife and teenage children. There are flashbacks to World War II, to the attic in a Ukrainian village where Frieda was hiding from the Nazis, with the then five-year-old Emile.

Like many Holocaust survivors, Frieda has not wanted to talk about the traumatic events she lived through in WWII (and in WWI as well). Thinking of the pogroms and betrayals of the Jews where she lived, Frieda calls the Ukrainians “murderers,” in the same breath as she talks of the good Ukrainians who saved them. The adult Emile just avoids emotional involvement; he claims he has very few memories of those times.

But the persistent questioning of Frieda’s granddaughter, who is doing a school project on the Holocaust, and a surprise visit from a member of the Ukrainian family who hid them, upsets the fragile peace of this American family. In a flood of agonizing memories for Frieda and Emile, the hurt that had long been suppressed emerges. But not only pain – also the love in the attic, and the fond memories of the games that Emile and Frieda played there. In the end, they remember. The question remains: How to get past the currents of hate and mutual demonization, in 1943 and now?

In 38 short scenes, alternating between 1992 in Philadelphia and 1943-1944 in Gribniv, Ukraine, there emerges in “Something That Belongs to You” a story of survival and memory, of complex Ukrainian-Jewish relations, of struggles to remember and forgive. The language of this autobiographical play is poetic (especially in the wartime scenes!) and there are in it flashes of humor, even burlesque. The underlying themes are of coming to term with great loss, of the importance of both remembering and forgetting on the way to forgiving, and of the choices, always there, that human beings must make between good and evil in terrible times.

SCENE 2
Pressner house 1992, shifting to 1943 Gribniv attic. Frieda and Emile. In attic there’s a 49-year younger Frieda and Emile, Myroslav Olesko’s head and body might be seen, but he doesn’t speak.
Frieda is lying in bed, but can’t seem to find a comfortable spot. She moans from time to time.
EMILE:  Are you OK, mammi?
FRIEDA: My bones hurt.
EMILE: Would you like me to get you a Tylenol?
FRIEDA: No, it won’t help. (She is quiet for a moment.) We didn’t have Tylenol then.
EMILE: (Thinks.) You mean in the war?
FRIEDA: In forty three. We had nothing. Half a suitcase. You don’t remember?
EMILE: I was six.
FRIEDA: You were five when we went in, six when we came out. With a father when you went in. Then they killed him. Oooh (She moans.)
EMILE: Rest, mammi.
FRIEDA:  Nothing. No meat for you.
EMILE: I’m OK. I remember some cold borscht.
FRIEDA: With a few bones in it.
EMILE:  That was the way it had to be. Olesko probably didn’t have any for his family.(Pause.)  It tasted good, mammi. Even if the one you make now is better.
FRIEDA: (Not listening to him.) Nothing.  No medicine for my brother. 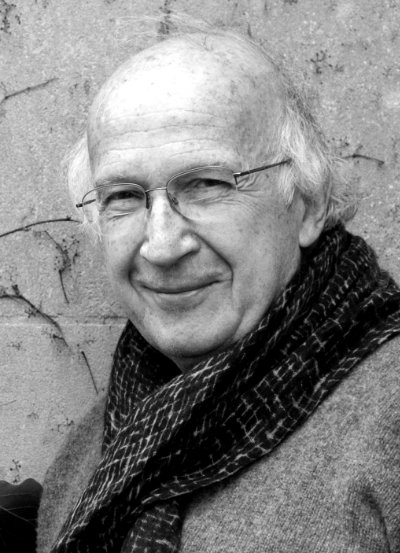 Roald Hoffmann was born in 1937 in Złoczów, then Poland. He came to the US in 1949, and has long been at Cornell University, active as a theoretical chemist. In chemistry he has taught his colleagues how to think about electrons influencing structure and reactivity, and won most of the honors of his profession.

Hoffmann is also a writer, carving out his own land between poetry, philosophy, and science. He has published five books of non-fiction, and six volumes of poetry, including two book length selections of his poems in Spanish and Russian translations. This is his third play (all of which have been produced); the others are “Oxygen”, with Carl Djerassi, and “Should’ve.”