Small Talk reimagines idle chatter with heightened lyricism and expansive scope in poems that are devoted to the minute particulars of life and language.

The book’s first section, “Here Nor There,” moves among diverse settings including Plymouth, Prague, Salzburg and Belgrade. These poems meditate on translocality, examining the evanescence of relationships and experience, the intimacy of presence and absence, and memory’s perseverance.

The long poem “A Child’s Guide to Candor” records and reflects on a child’s journey toward speech, exploring a parent’s role in providing their children’s words, and interrogating the relationship between language, nationality, family roles and relationships.

“News and Selected Poems,” the last section, begins with poems addressing the Fukushima nuclear disaster, the bombing of the Boston Marathon, and violence in Gaza, considering the relationships between event, language, and media presentation. The ensuing elegies and narrative poems allude to cultural figures including Aleksandr Solzhenitsyn, Allen Ginsberg, Bob Dylan, Charles Bronson, Dick Gregory, Michael Jackson, Pilgrim settlers and Wampanoag tribespeople, scrutinizing the overlap of personal and public history, and the creation of cultural identity.

“In Small Talk, Stephan Delbos has accomplished, if not the impossible, then the highly unlikely feat of fusing a Rilkean Romanticism with something like Bunting’s al dente concision and taut rhythms, a squaring the circle of a 21st century modern lyric that no one could have predicted. I take great pleasure in it, line by line, whether driven by sharp memories of childhood, or the difficulty of facing the world as a new father; a startling elegy for Charles Bronson, or a subversive homage to Bob Dylan; contemplation of a steel urinal in Dublin, or a door handle in Prague; whether in praise of wind or the winding legends of his native Plymouth; Delbos’ imagination is populated by the bright objects of the world in an idiom all his own. With a warmth and humor that’s not afraid to run disabused and cold, Delbos hits the road as a winning cosmopolitan of the present particular, a surprising troubadour of the now.” —Joshua Weiner

Asking all the old questions, we stood
an hour under a streetlamp’s bell jar;
every bar too swollen with laughter
to talk. In earnest, as if we could
touch truth, we kicked toes and shook hands
for this is what we do. Stubborn as footstools.
That was a simile. Michael my friend
and I were stoned, discussing the schools
of thought on fidelity, captured
comet of a lit joint slipping like belief
between us. I mumbled how I’d
known one love. Into the darkness scared
I pushed her. Michael said we swim in space.
Float helpless. I described her face. 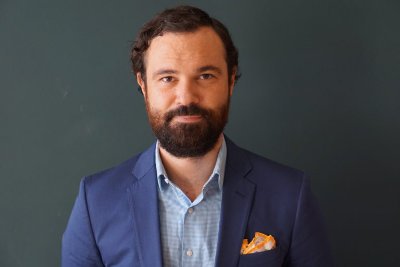 Stephan Delbos is the first Poet Laureate of Plymouth, Massachusetts. His poetry, essays and translations have been published internationally. He is the editor of From a Terrace in Prague: A Prague Poetry Anthology (Litteraria Pragensia, 2011). His play Chetty’s Lullaby, about trumpet legend Chet Baker, was produced in San Francisco in 2014. His play Deaf Empire, about Czech composer Bedřich Smetana, was produced by Prague Shakespeare Company in 2017. His co-translation of The Absolute Gravedigger, by Czech poet Vítězslav Nezval, was awarded the PEN/Heim Translation Grant in 2015 and was published by Twisted Spoon Press. His co-translation of Nezval’s Woman in the Plural is forthcoming from Twisted Spoon Press. He is the translator of Paris Notebook by Czech poet Tereza Riedlbauchová (The Visible Spectrum, 2020), and the author of the poetry chapbook In Memory of Fire (Cape Cod Poetry Review, 2016); and the poetry collection Light Reading (BlazeVOX, 2019). A Senior Lecturer at Charles University and Anglo-American University, he is also a founding editor of B O D Y.