Night Walking with Nathaniel – Poems of Salem by Dennis Daly

“In a time when other poets have forgotten the power of a metered witnessing of history, Daly brings a rare compassion to a community’s misfortune and celebrates its dignity.  These poems are precise, the lines embellished with a craftsman’s beauty.” —Afaa Michael Weaver

In Night Walking with Nathaniel, Dennis Daly skillfully draws a vivid panorama of  fascinating Salem, a town he knows profoundly well.  Its richly shadowed past contrasts ironically with its present: on Gallows Hill stands the wreckage of a playground, the Puritan Motel is now a scene of revelry.  Nathaniel Hawthorne, poet Jones Very, and innocents accused of witchcraft live and breathe again, alongside our contemporaries.  This is one of the more satisfying collections of American poems in years, a generous array of deftly crafted work, memorable for its storytelling, imagery, and verbal music.  Even readers unfamiliar with Salem will find it captivating. – XJ Kennedy

In a time when other poets have forgotten the power of a metered witnessing of history, Daly brings a rare compassion to a community’s misfortune and celebrates its dignity.  These poems are precise, the lines embellished with a craftsman’s beauty. – Afaa Michael Weaver

It looms, two-faced, over the rush outward,
The planets and radiant stars, the rows
Of echoing buildings, their outlines slurred
Together, space caught in a world of dark prose.

Cause before cause, before the keen question
Ever occurred to us, it moved moments
Over being, chilled us with religion—
The apostolic certainty of the ancients.

Once while we waited, its presence transformed
All that we were, a sealed tabernacle,
Exposed after years of thunder and sparks, stormed,
Shook off the bliss of our artful Babel.

Voyagers, now come home, we stop at this clock
Of merchants past and business of present,
Repent at will. This monstrance of the sidewalk
Still sends its signals out—bright and constant. 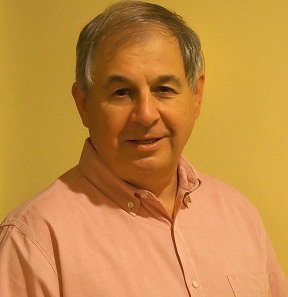 Dennis Daly lives in Salem, Massachusetts with his wife Joanne. They have four adult children. He is a graduate of Boston College and has an MA in English Literature from Northeastern University. Daly worked at General Electric for ten years. He edited and published The Union Activist newsletter and the North Shore Union Leader, a labor newspaper. He also was the managing editor of the Electrical Union News, the official news organ of Local 201 IUE. He was elected to a leadership position of the 9000 member IUE union. Later he worked as a Department Head in the City Of Salem. He has been published in many poetry journals and magazines and nominated for Pushcart prizes in 2013 and 2014. He is included in a chapbook, published by Northeastern University Press, with two other poets, Robert deYoung and Patrick Duddy. Ibbetson Street Press published The Custom House, Daly’s first full length book of poetry in June, 2012. His second book, a verse translation of Sophocles’ Ajax, was published by Wilderness House Press in August, 2012.