Mudança is first and foremost a book of discovery—of a new muse from Brazil, or “moose,” as she pronounces it; of a new language, Portuguese, in which mispronunciations turn shoes into toads and hair into horses, stampeding; of a new rainbow-colored currency, a veritable Noah’s ark, what with the fauna that “house” therein … and to a lesser extent a book of rediscovery—of the poet’s mother tongue, the “patois” that mothers speak to babies; of a transcendental “yes,” as expressed in hymns from childhood; and of ecstasy on the playground, and humiliation, which led the poet, in second grade, to swear off dancing. But he changed his stance, the poet did, and Mudança (the Portuguese word for “change,” which maybe “contains the word for ‘dance’”) is a witty and poignant and life-affirming “letting loose.” —David Havird

Mudança, the Portuguese word for change, is the fitting title of Kevin Cutrer’s new chapbook of poems. In this, his second collection, we watch a sensibility at play in the confluence of two languages, our own English and the Portuguese of Brazil. Cutrer takes pleasure in the affinity of words and meanings as they call to each other across the linguistic divide. And his pleasure is ours as we read. He writes a paean to the Brazilian currency, the real, the bills of which are graced with vivid images of macaws, jaguars and sea turtles. Looking at his wife’s sapatos (sneakers – she’s from Brazil), he ponders the sonic similarity of that word with sapos (frogs), which becomes a point of departure to reflect on his wife’s aversion to “frogs, geckos, salamanders, everything” that lives in the symphonic swamp. The title poem notes the word dança tucked inside mudança and then reels out the ideas of dance and change in a fine narrative that explains how meeting his wife transformed him. These are fun, warm, smart poems – reassuring to read in dark times. —John Foy

They tell me the banked fires
on every street corner tonight
reveal in smoke and tears the face
of the one you are meant to marry.

Countless ancestors
peered through ribbons of soot,
starlight blurs in their eyes,
to look upon the man God would provide.

The smoke never revealed
the life she would marry into:
sob of the accordion,
pity of the town, living martyr

of faithfulness, the good wife
and keeper of the children, washwoman
tending clothes that brought home
the rouge and scent of the other women.

Young women wander
the flickering swelter, shoot
cachaça from cans, dance
to the sob of the accordion,

the triangle’s alarm. They won’t know
the stranger by his face, nor will they
have heard his name in the snap
of logs succumbing to the flames. 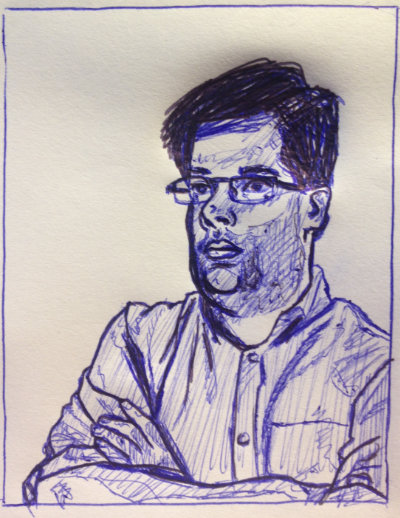 Kevin Cutrer is the author of Lord’s Own Anointed (Dos Madres, 2015). Born and raised in Southeastern Louisiana, he taught English in Northeastern Brazil, and now lives in Boston. His poems and reviews have appeared in such publications as The Hudson Review, The Dark Horse, The Raintown Review, Literary Matters, and Panorama: the Journal of Intelligent Travel. His poems have been featured on E-Verse Radio and Poetry Daily. He frequently reads in venues across Boston, Cambridge, and New York, and is the co-host, with Luke Bauerlein and Luke Stromberg, of Works Cited: a Podcast about Poems. For more information about his work, visit kevincutrer.com.