Woolf wields a fierce and genuine wit against flim-flam hopes, and his poems bring laughter and discomfort in equal measure. —Murray Shugars

If you were to listen to a middle-aged Holden Caulfield, you might hear a voice like the one in Geoff Woolf’s gut-punchingly funny and irreverently honest poems. Like Salinger’s young protagonist, the speaker in these prose poems has no patience for phony Americans, such as a mountain climber being interviewed on TV: “the way he kept saying the names of these companies that make his equipment I bet they pay him to blab like that.” Later in the same poem, the speaker admits that he, too, might be bought for the right price: “even though I’m pretty much a coward I have a feeling that there’s this certain amount of dollars that would make me brave as shit too.” The chatty vernacular—spare of unnecessary punctuation—echoes an American idiom as familiar as the Midwestern landscape where these poems dwell.

Here, you might enter a tavern where God occasionally hangs out to stuff quarters in a jukebox or to play a divinely rigged game of pool, strong-arming patrons with bullish omnipotence. As these poems lead you to uncanny places, remember what the speaker says: “Sometimes when a mime is making me uncomfortable and claustrophobic I have to remind myself that it was his choice to get in that imaginary box in the first place.” Don’t get me wrong. These poems aren’t like a mime’s make-believe box, but their uncanny nature challenges you to question your certainties. Woolf wields a fierce and genuine wit against flim-flam hopes, and his poems bring laughter and discomfort in equal measure.
– Murray Shugars

The always-inventive “I” of these box-like prose poems (left- and right-justified) is as hard to describe as he is exhilarating. These potent little narratives never go where you think they’re going. Woolf’s voice is plastic, elastic, hits no wrong note throughout (and repeats none), and is usually hilarious (if you’re not scared of the dark), always serious (in the comic lies the tragic), and even profound (just often enough). Here’s the ending of a poem titled “Girls”: “Where I live whenever divers go into the river they find girls. And that’s just the river in my town. I was looking on this map and there are lots of other towns with rivers. Also there are lots of missing girls. Do you live in a river town? Does this sort of thing happen there much? If so drop me a line. I’m really interested in patterns right now. Maybe it’s nothing.” Geoffrey Woolf’s first book is a brilliantly comic tour de force. – James Cummins

You hate to blame the fans but that’s the real reason you and Merle don’t tour together anymore. It’s a tough gig and you start to feel sorry for yourself night after night having to go on stage after him. You stand up there and listen to the crowd shout Burning Bush at you just so long before it starts to take its toll. It’s not that you don’t want to do the old stuff but here you are sweating blood into this creation and all they want to know is where’s Jesus? When’s Jesus coming out? It brings back all the horrible memories of that last show you did together in California. Meanwhile you sit backstage and watch Merle play the hits and they go completely apeshit. He does something from the new record and they go apeshit. He plays the worst crap from the 80s and they go apeshit. And here you are broiling under the lights trotting out a hundred new species you made last year and this motherfucker in the front row keeps shouting Rainbow at you. You kick out the footlights impregnate his wife and storm off stage. 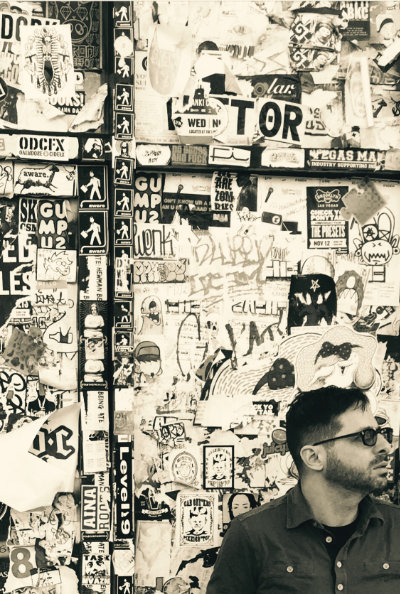 Geoffrey Woolf lives in Cincinnati, Ohio, where he is a Professor of English and Literature at Cincinnati State Technical & Community College. His work has appeared in publications, including The Cincinnati Poetry Review, Smartish Pace, and Poet Lore. He is the author of two previous collections: When You’re not Here I Notice Things (2002) and Bogeyman (2012). He is a graduate of the University of Iowa Writers’ Workshop and The Werner Institute for Negotiation and Dispute Resolution at Creighton University.