Former Indiana Poet Laureate Norbert Krapf returns to the landscape of his southern Indiana childhood with memories of loss. While facing the death of his second sister from leukemia, he visits the small tomb of his stillborn sister, remembers abuse by his pastor, and laments a brother’s disappearance from the family. Being back in Indiana hill country, however, he relives his parents’ love of their native place. He reconnects with his German heritage, sites in his ancestral Franconia (northern Bavaria), and the spiritual woods and fields of the Indiana hill country he once roamed. In his hometown to read poems with his Franconian dialect poet friend Helmut, he is moved to hear him read poems in the dialect his parents spoke to one another. Sitting with his Colombian-German-American grandson, four, at his side savoring the German woods “like a little Buddha,” he sings a new hymn of praise, “Morning Sylvan Symphony.”

The test of ‘poetry of place’ is whether it feels perfectly familiar to a reader who lives there. I’m a southern Indiana native who feels right at home in Norbert Krapf’s poems. —James Alexander Thom

Norbert Krapf is blessed with the haunting beauty of his childhood and youth in rural Indiana.  Family and friends crowd upon him, gentle men and women, hard working farmers straight out of gracious but impoverished Germany of the nineteenth century.  They are his roots in being, and he pays them deep, discerning love and gratitude for who they were and are to him still, strengthened in himself as man and poet because of them. —David Ignatow

With its emphasis on the specificities of a place and its people, Krapf’s poetry has deep affinities with the local color tradition of American literature.  But like Kentucky poet Wendell Berry, Krapf’s forte is in recognizing the spiritual interaction between a people and their place…. For Krapf, the relationship is that of a son who has been much blessed through the sacredness of place and familial love. —The Sycamore Review

The mix of sunny and dark images places the poet in a Frostian tradition as well as a Whitmanian one; Krapf’s poems reverberate with the mystery of human character at the core of his family roots. —Confrontation

Song of the Radio Bees

swarming nearer and nearer as a loud hum
turned deafening and they roared closer.

I heard a female voice say, “Ladies and gentlemen
start your engines” and those bees roared again,

louder than ever before. The low-slung cars
roared off, big bumps raised on my arms

and legs, and my lips smacked with the taste
of honey and malt as this late song brewed. 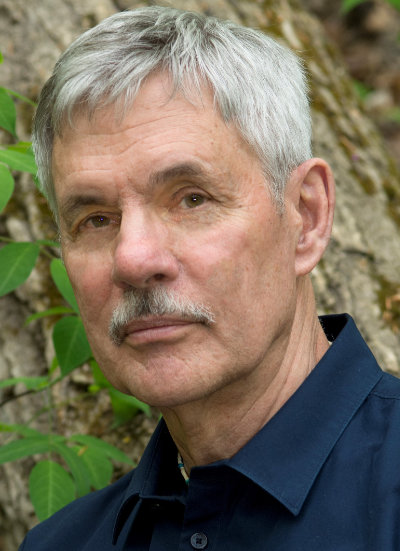 Former Indiana Poet Laureate Norbert Krapf was born in Jasper, Indiana in 1943 and has lived in Indianapolis since 2004. For 34 years he taught at Long Island University, where he directed the C.W. Post Poetry Center for 18 years. He has published twelve poetry collections, including The Return of Sunshine, about his Colombian-German American grandson, Somewhere in Southern Indiana, Blue-Eyed Grass: Poems of Germany, Bittersweet Along the Expressway: Poems of Long Island, Bloodroot: Indiana Poems, The Country I Come From, Looking for God’s Country, and Catholic Boy Blues, which he adapted into a play of the same title performed at the Indy Eleven Theatre of IndyFringe.

Krapf has won the Lucille Medwick Memorial Award from the Poetry Society of America, a Glick Indiana Author Award for the body of his work, a Creative Renewal Fellowship from the Arts Council of Indianapolis to combine poetry and the blues, has had his poems included on IndyGo buses and a poem in stained glass at the Indianapolis International Airport and his poems read on The Writer’s Almanac. He has released a poetry and jazz cd, Imagine, with pianist-composer Monika Herzig and collaborates with Indiana bluesman Gordon Bonham.