In No Man’s Ear by R. Nemo Hill

The poems of R. Nemo Hill are certainly contemporary, but they are also more than that. They arise from an authentic encounter between the poet and the world, or the poet and himself, or the poet and something else. A critic somewhere online has referred to Nemo as “a bit of a mystic,”but I don’t see it quite that way.

As the reader probably is aware, nemo is “no one” or “no man” in Latin—for the above reasons, an apt name for this poet. And one thing that becomes clear from reading this book is that No Man’s ear is a very good place to be. One is struck by the uncanny sense of timing in the inflections of sound and sense from poem to poem. …. I think of Nemo’s poetry, therefore, as more mercurial than mystical; by turns earthy and visionary, witty and metaphysical, naturalistic and symbolistic.  —Andrew Frisardi

He flees!
Into the light’s sharp hiss!
Is gone!
As once the serpent’s kiss
that licked my ear withdrew—to where
a gaze becomes a vacant stare.
A fire in my eyes now lit
so bright my soul recoils from it
and swift spins round from light to dark:
so burns the ring of Kingly Art.

By foolish hopes be not deceived,
O strangely deafened Widows!
From neither living nor from slain
expect reprieve.
And he who reigns—
save all of pity for this King—
O! Pity him until he’s dead!
For I smell his blood
beneath the rolling of my own head. 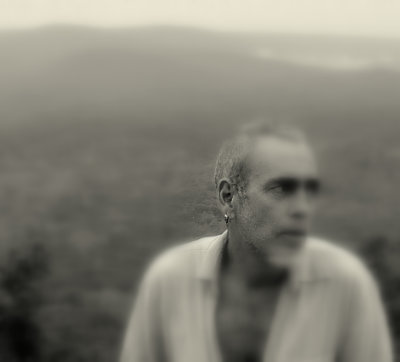 R. Nemo Hill is the author, in collaboration with painter Jeanne Hedstrom, of an illustrated novel organized according to the processes of medieval alchemy Pilgrim’s Feather (Quantuck Lane Press, 2002), a narrative poem based upon a short story by H.P. Lovecraft, The Strange Music of Erich Zann (Hippocampus Press, 2004), a chapbook in heroic couplets, Prolegomena To An Essay On Satire (Modern Metrics/Exot Books, 2006), and a poetry collection, When Men Bow Down (Dos Madres Press, 2012).