Hamlet Figura is a serial work, a long poem, that constitutes a reading of, or response to, Shakespeare’s Hamlet from the point of view of language.  The work aims to interrogate language in philosophical terms, whether directly or indirectly.  It is based on two major premises: that Hamlet is caught up with language as such, and that language in general creates world and is redemptive, whether or not the play represents this point of view.  The theory of language implicit in the work is indebted to other theories of language and to theory in general.  But it is based very much on my own sense of language and its centrality to the human condition.  Hamlet Figura is an autonomous work, though one that depends on another, in this case Shakespeare’s canonical text.

The figura of the title is significant toward these objectives; it is a controlling idea throughout, especially in later stages.  It owes something to literary history, especially to Erich Auerbach’s Mimesis, but it is largely my own construction.  In the most general sense, figura stands for language—first and foremost poetic language, or dramatic language.  Figura encompasses style as well as the social and physical world, form and reality.  But figura also creates reality, creates the world.  Without language we are alone in the universe.  When figura goes too far as style, then the world is liable to explode.  But figuration is essential to any work, without which the work would explode.  Within the terms of Hamlet Figura, the ultimate gift of language is redemption.  And despite the apocalypse in the foreground of the work, the state and the world of Hamlet, in my rendering of the play, will survive and potentially renew themselves. —Daniel Gabriel

But the gesture contains the ultimate
Meaning of language. For it is language
That embodies the form of future. And we must
Read it and hear it and pronounce the drama
In our own constructions. Here is the eternity

Of language, the ever-present flow of signs.
Here Hamlet speaks through us, through
Our own stagings. The ghost recognizes us
In the dark, and we take his dying as the dying
Of the son, as the dying of a poetry that lives beyond itself. 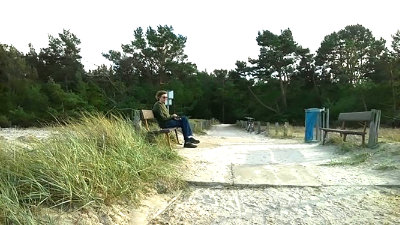 Daniel Gabriel is the author of Hart Crane and the Modernist Epic: Canon and Genre Formation in Crane, Pound, Eliot, and Williams (Palgrave Macmillan, 2007), Sacco and Vanzetti (Gull Books, 1983), and Columbus (Gnosis Press, 1993); and the editor of Richard Darabaner’s Plaint, a collection of his poems (Dos Madres Press, 2012), for which he also wrote the introduction.  Sacco and Columbus are both book-length poems, or poetic works, on historical subjects.  Theater productions include a stage version of Sacco and Vanzetti, and the plays The Four Seasons of Salt, Exits, Snowbound, and The Fortunate Instant, an adaptation of Edgar Allan Poe’s “The Fall of the House of Usher.”  He has a Ph.D. in English from The City University of New York Graduate School, and taught for many years at Rutgers University.  He lives with his wife Marlen, a writer, in Berlin, Germany.