In this moving chapbook, Flip Requiem, D. R. James flips poetic expectations like a skilled juggler of the world’s finest carnival. From meditations on aging to explorations of the future, from the beauty of the natural world to cosmic considerations, from ekphrastic (a whole section!) to experimental, from haiku to jazz, these poems reveal James’s depth and incredible range. These are skilled and tender poems, both readable and surprising. —Anne-Marie Oomen

In this deft and prescient collection, D. R. James has both diagnosed our “dizzy symptom” and scratched out the vital prescription: holistic poems that enact a rigorous mind’s engagement with this tenuous age, or what James calls, with his wink-light touch, “the more sober / though no less precarious rest of our lives.” Despite their modesty, and in a voice that is comic, molecularly honest, and fern-gentle, these poems accomplish the grand task of embodying authentic compassion, and in so doing lead the reader through “the puzzled tongue of mourning,” into the rarefied empathetic that is, line by supple line, accessible to us all. —Chris Dombrowski

Flip Requiem takes aim at old angsts and calmly shoots them down.  There is an acceptance here, of death’s haunts, of aging, of the anxieties of the future.  “Doom / be damned,” because “All is not / black.” In poems that are musical, alliterative, and ekphrastic, we meet speakers who “turn… face[s] forward toward / the green volcanos building in the trees.”  The whole collection is like a breakfast cup of “Gazpaichu for the Soul,” with jazz on the record player, and turned up loud enough for the neighbors to hear. By the end, readers, too, are on the lookout for their own “imponderable streaks of fleeting joy.” —Katie Kalisz

So much like
old men, these shaggy
oaks, staggering back from porch past
lot line, as if in a crowd
grumbling. So aged
and graying. So obliviously
arrayed, each in its closed
circle, its world. Each shade-
throwing trunk is a trunk
of a line by which
aspire the green-secrets of Earth. Each leaf
is a scrap to a soul. When
I was a boy, my parents and theirs
would talk at the table,
complaining. Dad would turn
his eyes to mine, “Communists,”
he’d seethe, and the others
would agree. Now, as the sun descends,
what gruffness I behold—feeling
hungrier than squirrels and insatiable. 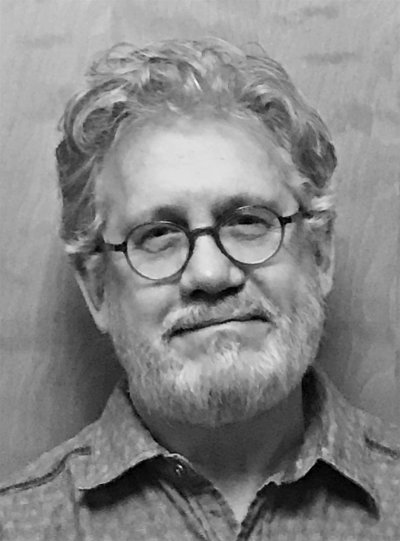 D. R. James has taught writing, literature, and peace-making at Hope College for 35 years and lives in the woods near Saugatuck, Michigan, with his wife, psychotherapist Suzy Doyle. He earned an MA in English at the University of Iowa and an MFA in poetry at Pacific University. Poems and prose have appeared in a variety of journals and anthologies, and he has published two books of poems, If god were gentle (Dos Madres Press) and Since Everything Is All I’ve Got (March Street Press), and six previous poetry chapbooks, most recently Surreal Expulsion (The Poetry Box) and Split-Level and Why War (both Finishing Line Press). His micro-chapbook All Her Jazz is printable-for-folding at the Origami Poems Project. D.R. James can be found on Amazon.