In this fifty-poem collection, Fever, the poet grapples with an existential fever which boils and cools, now embroiling the mind in dark meanderings, now paving the way, albeit through complex twists and tangles, to the core pleasures which often arrive while chasing after Beauty’s thrall.

The manuscript is divided into three parts: Pernicious Unease, Therapeutic Harmony, and Perfect Conditions. This last section depicts the poet’s realization that through luck and artful practice, precious wellness may be restored.

Artists make worlds. The world created by poet Irene Mitchell in Fever, is a world of questioning. The answers provided are found in thoughts emerging from the quotidian, becoming transcendental — thus evoking the hidden cosmic places where our minds wander. These poems report from singular landscapes in Mitchell’s sensual realm. Her inquisitiveness turns to introspection and finally suggests a world of possibilities. It is through possibility, then, that we are covered. We live in times of uncertainty: the comfort of a multitude of technologies often creates false reassurance wherein the power of language is almost forgotten. However, in Irene Mitchell’s poetry this power is very much alive and we are invited to explore the vivid dwellings she offers us as readers. Her poems are a refuge from our uneasy lives. They are poems that show us worlds in which, “after the long tyranny of school is over,” we can find answers to our existential wanderings and wonderings. —Daniela Bertol

Irene Mitchell’s latest collection Fever straddles not only the border but the entire landscape between surrealism and concrete knowability. Each poem is a shimmering invitation to a mysterious journey of resignation, joy, introspection and wonder. Mitchell’s themes focus on the precious inevitability of each moment and its transitory nature, guiding readers on their own journey through a profound labyrinth of self-discovery.  —Alex Balogh

Irene Mitchell’s new book Fever depicts a world where there are “maple leaves / below which, like the spikes and ebbs of fever, / flushed peonies are cooling.”  She writes about pain, its many dimensions, and its opposite, beauty, especially the beauty of the natural world, its “showy inflorescence.” Mitchell speaks to the role of the artist in society: “It is our privileged duty just to be, / and to speak our languages trippingly.”  And she does. She does. —Barbara Crooker

Yes, Mitchell’s work is a garden; but it is a sculpture garden. What she plants can be surprising, funny, tough, lyrical, erudite, terse, beautiful; and yet it comes up carved to specificity. (Go ahead, touch the art.) —Marion Hunter

The honest follow rules
while poets prosper through their own devices.

Disperse discontent to the wind,
proving your elegance.
Be happy here under sun
and sky, each butterfly
a minion.

The crepe-paper sailboat
lolls in its oval.
Beyond lies the brook, the mead serene.
The hours are gliding.

Such visions deserve distinction
for they are fanciful, to be honored
for their lift —
proving that a poet’s shifting temperament
glints like a vapor trail
upon a jazzy bed of blue. 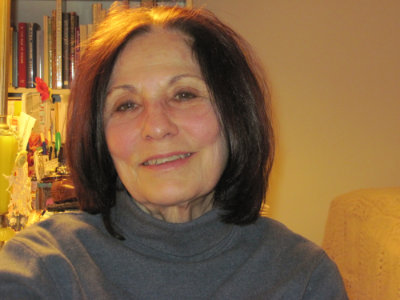 Irene Mitchell, a long-time teacher of English and Writing in inner city and rural New York, is the author of Equal Parts Sun and Shade: An Almanac of Precarious Days (Aldrich Press, 2017), Minding the Spectrum’s Business (FutureCycle Press, (2015), A Study of Extremes in Six Suites (Cherry Grove Collections, 2012), and Sea Wind on the White Pillow (Axes Mundi Press, 2009).  Formerly Poetry Editor of Hudson River Art Magazine, Mitchell is known for her collaborations with visual artists and composers. Several of Mitchell’s poems have been executed as a series of  broadsides, entitled “Seduction”, by the Italian artist Daniela Bertol. A selection of her poems was set to music for piano and voice by composer Dallas Cline, in an art-song cycle entitled “Past All Doors”, which had its recorded debut in Stuyvesant, New York. Mitchell is a 2019 Associate Artist in Residence at the Atlantic Center for the Arts.