David Giannini’s Faces Somewhere Wild spans his 45 years in the Berkshire hill-towns of Massachusetts. … Giannini is the poet-hunter, who identifies himself as prey, in search of what waits at the threshold of expression: It wants to grab you by the throat. You don’t turn away; /instead, you unbutton your shirt.

Even as he fleshes the world with words, the poet strips it back to a superordinate mystery of atoms in super positions/in two or more planes at once. Giannini deliberately makes no attempt to resolve the paradox. Our guide through the Berkshires renders the vessel of creation as both full and empty. Feeling emptiness wing into you with its terror! Then owl to the empty nest. No reason not to have wept. Faces Somewhere Wild is a perch where the burden of mortality touches our hearts. Highly recommended. – Paul Pines

The sound of a core tossed into tall grass
for a moment is the sound of a woman
shifting in a loose yellow dress.

I stand for hours at the edge of a field:
nothing appears but daylight’s rim,
then darkness.

I throw both hands up into the night where
they become paired wings. Love,
be the gift your shadow brings. 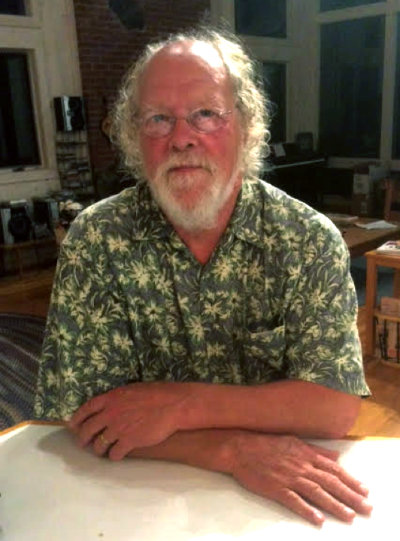 David Giannini’s most recently published collections of poetry include SPAN OF THREAD (Cervena Barva Press,) THE FUTURE ONLY RATTLES WHEN YOU PICK IT UP (a selection, Feral Press,) AZ TWO (Adastra Press,) a “Featured Book” in the 2009 Massachusetts Poetry Festival; and RIM/WAVE (Quale Press.) 13 of his chapbooks were published 2013-16 including INVERSE MIRROR, a collaboration with artist, Judith Koppel. His work appears in national and international literary magazines and anthologies. He was nominated for a Pushcart Prize in 2015. Awards include: Massachusetts Artists Fellowship Awards; The Osa and Lee Mays Award For Poetry; an award for prosepoetry from the University of Florida; and a 2009 Finalist Award from the Naugatuck Review. He has been a gravedigger; beekeeper; taught at Williams College, The University of Massachusetts, and Berkshire Community College, as well as preschoolers and high school students, among others. Giannini was the Lead Rehabilitation Counselor for Compass Center, which he co-founded as the first rehabilitation clubhouse for severely and chronically mentally ill adults in the northwest corner of Connecticut. He can be found on the web at: www.davidgiannini.com