Everything in Motion, Everything at Rest by John Bradley

What can you say about a photograph? a photographer once asked me. Where to begin! There’s the mysterious art of photographers, transforming motion into still image, transforming light and shadow into composition, which can move us without the use of words. …. I wish to thank all the photographers whose images inspired these poems. For those who wish to see the photos, the title of each poem provides the information needed for the reader to track down the photo online. What can you say about a photograph? Take this simple test. Drop a photo in your mortar; grind it with the pestle. What remains? Nothing—but the dust of words. —John Bradley

In Everything in Motion, Everything at Rest, John Bradley’s poems elicit, from the static time of photographs, dynamic meditations that speak to the disturbingly amoral patience of history and implicate us as all too willing to rationalize our acts of witnessing so as to ignore any complicity in the horrors of humanity true vision can’t ever forget, recognizing forgiveness is only possible after acknowledgement, after all. These poems heroically insist on both seeing and feeling, on giving a damn, and they steadfastly enjoin us to do the same. —George Looney

We know many of the photographs as threads woven into our lives and into our understandings of the world and of history. And in some ways we don’t know the photographs at all. The photo poems are not captions; their evocative language—in one case, chanting; in another, the subject’s monologue—creates a unique relationship with each photograph, bringing the images alive in new and startling ways. Although the collection is serious, it also celebrates photography. Perhaps paradoxically, the precise, varied, and imaginative language keeps everything in this gallery intensely alive. The photo poems in Everything in Motion, Everything at Rest enlarge as you read them. I am energized by these photo poems, and grateful to John Bradley, whose work goes beyond the usual to open the borders between these arts. —Veronica Patterson

Car Accident—U.S. 66, Between Winslow and
Flagstaff, Arizona, circa 1955, Robert Frank

It’s all right. You can stare. Mr. Frank certainly is.

You can’t see him and his camera, but he’s here, watching

us. I don’t know who spread the wool blanket over me, but

it doesn’t matter. Maybe one of the four mourners lined up

behind me in the weeds. The woman hugs herself tightly,

staring down at me as if I was contagious. The man beside

her turns, telling her something she’s already forgotten.

The two men in cowboy hats have nothing to say. One folds

his long arms behind him, as if he’s handcuffed; the other clutches

his hands by his abdomen. You ask what’s that in the dirt nearby?

Stone slabs from broken flooring. In the background,

two barren homes, an empty garage, a small shack, and

an outhouse, all disappearing into the ghostly winter hue.

want you to see the mangled car, the traffic shushing by

Highway 66, or the shoes I was wearing. He only wants

you to ponder that unseen figure under a coarse blanket,

alongside a highway, in stealthily falling snow. Just that. 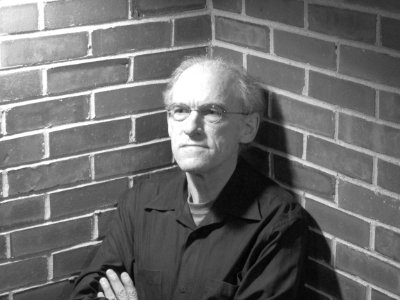 John Bradley was born in Brooklyn, New York, and grew up in Framingham, Massachusetts; Lincoln and Omaha, Nebraska; Massapequa and Lynbrook, New York; and Wayzata, Minnesota.  He is the author of eight previous full-length books of poems, prose poems, and aphorisms and the editor of three anthologies. His first book, Love-In-Idleness: The Poetry of Roberto Zingarello, won the Washington Prize in 1989, and a second edition, expanded and revised, was published by Word Works.  He is the recipient of two National Endowment for the Arts Fellowships, a Pushcart Prize, and grant from the Illinois Arts Council.  For over twenty years he has been reviewing books of poetry for Rain Taxi.  He lives in DeKalb, Illinois, with his wife, Jana, and their cats, Kiki and Zuzu.