Stuart Bartow, with his gorgeous language and unbridled imagination, seems descended from the Irish bards, at home in both nature and magic. … A traveler, not of this earth, he is funny and nimble, much as he describes Buster Keaton: our acrobat / of infinite trouble. —Barbara Ungar

In Stuart’s work I admire the startling leap from the mundane and specific to the sublime; each poem is a kind of silvery bridge between our everyday experiences and the heights to which our sensibilities soar from time to time. Sometimes his poems remind me of the pictures I’ve seen of the slender, lacy bridges the Arabs strung across Andalusian chasms. —Djelloul Marbrook

Stuart Bartow’s EINSTEIN’S LAWN takes more than one leaf of grass from Whitman in creating a capacious, tender, and, finally, unifying field. He does this by showing the invisible at play. Once on the other side of time / the beginning begins again. Bartow tells us, as if to indicate what happens to the man painting a painting of a man painting a painting in an infinite regression. These poems exist on the threshold where each of us carries a labyrinth into a labyrinth. Einstein’s unruly head of hair, the chaos of his desk, are proofs of his general relativity theory, and the quantum universe embedded in the human heart. We are warned the very thing you are trying to capture / will disappear as instantly as a person / in a dream, a fish panicked by a shadow. Even so, there is the wind that embraces us / like a being that seeks to wind us into one. This includes Mary Shelley’s deathless Frankenstein’s creature, the monster who ventures north where icy winds weave a blanket around him as a mother might. The poems in this rare collection are always moving toward epiphanies that leave us feeling as though we’d stepped into a momentary glimpse and lived there for a lifetime. —Paul Pines

In his fabulous new book Stuart Bartow makes physics poems that successfully mix the language of literature, science, and popular culture. Bartow’s range is vast, like that of other cultural technicians such as Albert Goldbarth. Bartow is expertly referential across the so-called high and low spectrum, equally comfortable discussing Saint Francis as he is Zombies, the Kronos Quartet to Buster Keaton, and a sequence of humanizing poems on Albert Einstein, all driven by a precise lyric eye/I. Bartow’s poems suggest there is never nothing to write about, in fact the world is such a vast subject, this life we live of loss and joy—can we ever figure it out? But perhaps there is an answer in poetry (much like physics?) Or as Bartow suggests, that poems make a kind/of sense of their own and if you can feel/that, you know how divine/beings might see this world. —Sean Thomas Dougherty

Stuart Bartow, with his gorgeous language and unbridled imagination, seems descended from the Irish bards, at home in both nature and magic. Yet he loves to play with the latest developments in physics and astronomy, mashing them up with B-movies and scifi, or sometimes Greek myth. A traveler, not of this earth, he is funny and nimble, much as he describes Buster Keaton: our acrobat / of infinite trouble. —Barbara Ungar

wasn’t Einstein’s, but an eight-year-old girl’s
who took to him in Princeton.
She’d visit after school (unknown
by her parents), and Albert would help
with her math homework. Imagine
Bach for music tutor, Michelangelo
for art, Darwin for science
or Dickinson for poetry. I knock
on Emily’s door. She sees me

from her upstairs window; though her feet
are soundless, I can hear her white dress rustle
as she descends the stairs, opens the door
just wide enough for a skinny boy. The house
is fragrant with baking. At a wooden table
we read Keats. Her eyes frighten me at first
but eventually I adjust, she
even shyer than I am. After school,
baseball season over, what she really
teaches is that my own weird way of seeing
things is okay, that poems make a kind
of sense of their own and if you can feel
that, you know how divine
beings might see this world. 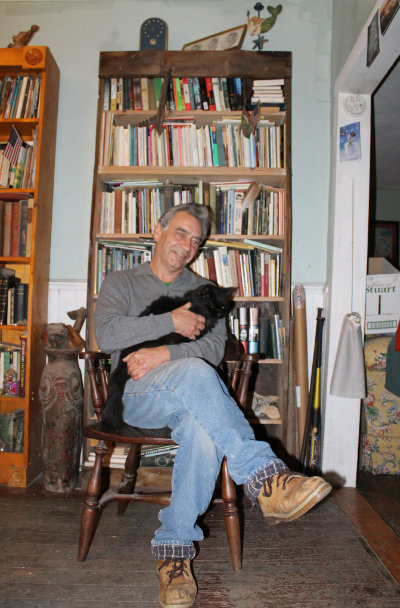 Stuart Bartow teaches writing and literature at SUNY (State University of New York) Adirondack, where he directs the college’s Writers Project. He is also chair of the Battenkill Conservancy, a grassroots environmental group. His most recent book, Teaching Trout to Talk: the Zen of Small Stream Fly Fishing, received the 2014 Adirondack Center for Writing non-Fiction Award. He lives near the Vermont-New York border where he likes to hike and fish.