Damage collects over three decades of Mark Scroggins’s poetry: from the jittery, post-punk influenced work of Anarchy, to the vitriolic time-and-space travelogues of Red Arcadia, to the brutal, pointillistic thrash-jazz miniatures of Torture Garden: Naked City Pastorelles, to the more expansive yet still sardonic poems of Pressure Dressing. These titles are supplemented by a selection of both early and more recent work, all of it marked by Scroggins’s characteristic wit, thoughtfulness, formal innovation, and wistful lyric intelligence.

Like a kaleidoscope (“a pretty seeing”) that offers a new snowflake symmetry with every jiggle, these poems of Mark Scroggins teach us that chaos is a restless order livelier than order itself. —Guy Davenport on Anarchy

There’s an extraordinary excitement coursing through these poems. Electric with a kind of headlong internal enjambment and melodically stuttering parataxis (modernist spasms of ecstasy run face-first into moral entropy), they vibrate at a pitch where desire topples into the forbidden, the decayed, and the just plain nasty. —Patrick Pritchett on Torture Garden: Naked City Pastorelles

Reader, beware—Mark Scroggins’ Red Arcadia is a pit-bull of a book, and it will have you by the leg before you’ve even started to run. Its anger is as outrageous as Swift’s or William Burroughs’. Its idiom veers from Thersites to Cassandra and back, while some passages are so far over the top that the top can’t any longer be seen. —John Matthias on Red Arcadia

These sharp-eyed, sharp-tongued poems register damage, reading commodities or movies for us, out there in shopping malls or imaginary museums. They resolutely think through the world, half-scratched mordant footnotes to our political realities. They offer small consolation. —Robert Sheppard on Red Arcadia

Mark Scroggins’ Pressure Dressing is linnet-less and unsolaced and, for all that, marvelously beautiful. The book is a long contemplation of catastrophic life itself, from its tufted inclines to the ongoing failure of the site, the body spilling over the wall, the pressure dressing … struggling, “with mixed success,” to hold. —C. S. Giscombe on Pressure Dressing

Pressure Dressing leaves us wondering where and how deeply are we wounded. In these poems, most especially in the extraordinary title suite, we are kept distracted from our own pain by the poet’s talk, his brilliant counterpoint of realities, his interleaving of lives, lived or glimpsed, his words alert to humiliation, to hurt, to beauty, to ideas, to others, and above all, to the transfiguring detail. —Joseph Donahue on Pressure Dressing

Over some silent footage from the turn
of the last century, Ishmael
narrates the industrial techniques
of drawing forth Leviathan: cinematically
sterilized, the buckets of blood
rendered a grey-black celluloid
shimmer, the work of the precise,
wooden, floating abattoir before me
(for the first time) in living motion
echoes in dull but vivid déjà vu
on the video screen. Too neat:
fifteen, twenty chapters of viscous
dissection tried-out to six
minutes of jerky motion: the Book
of Job in Reader’s Digest condensation. 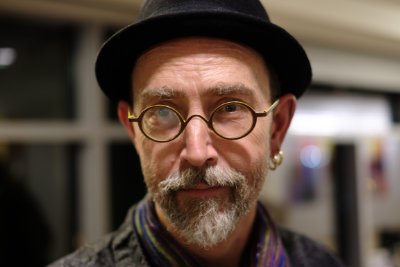 Mark Scroggins is a poet, biographer, and critic. He was born in Frankfurt am Main, West Germany in the depths of the Cold War, and grew up in various places—Germany, upstate New York, California, Texas, Kentucky, and Tennessee. He now lives in Montclair (New Jersey) and Manhattan.

For the past seven years, Scroggins has been working on a long serial poem, Zion Offramp; the first fifty sections are being published by MadHat Press.