Returning to the homeland reborn after a 2,000-year-old fitful sleep, Steven Sher writes of his experiences living in this land, turning what he apprehends into a mosaic of word truth. As an observant Jew living in Israel, he lives on the razor’s edge. Those who say “On the one hand, but on the other…” are split by the blade. He takes a side, albeit against fearsome odds, living in a place where those who bash in the heads of babies are rewarded as heroes—with squares named after them, with money given to their families—making the very act of terror a successful enterprise. Read Contestable Truths, Incontestable Lies for a profound, strong dose of the reality of living in Israel. — Stanley H. Barkan

“If you want to feel the pulse of a Jew living in Israel today, you must read Steven Sher’s astonishing new collection of poems. His pen deftly captures the subtle shades and nuances of daily life, and his poems will open your eyes (and heart) to the sweetness and joys, as well as the heartaches and challenges, of living in the land of our ancestors.” —Bruce Black

Steven Sher’s Contestable Truths, Incontestable Lies is a remarkable achievement in both poetry and as a chronicle of life in contemporary Israel with all its challenges to surviving. Sher’s voice remains powerful, clear and moving, his tone unflinching. He is perhaps the sincerest and most authentic poet I’ve heard in a long time. And his vast range of subjects weaves ancient traditions with current concerns such as terrorism and mass shootings. The emotional landscape of violence and the need to survive through our faith resonate through this book. When the daily news concerning conflict in Israel seems so negative, this is a mesmerizing poetic journey that ends on an affirmative peaceful note that will somehow give hope. —Laura Boss

The vibrant portraits of Israel and Jewish life described here are brought to life by an accurate and clear poetic language that is always a pleasure to read although often frightening in its journalistic accounts of everyday conflicts and persecution. Although I stem from the other side of the political spectrum, there is much beauty to be experienced and much to be learned from Steven Sher’s poems. They speak a truth that is often beautiful and sometimes terrible to process, but always essential to know. —Professor Karen Alkalay-Gut

Choked with cars, the street
is blocked in both directions.
Excited boys approach the gate,
each shout of joy triumphant.
One mother on the front steps snaps
a photo of her nervous son.
One teacher spreads his arms
like wings over their shoulders,
leads two boys inside the school.
A straggler son and father arm in arm
must run to reach the street.
Somehow all will find their way.
Soon we’ll hear them in assembly sing
and then the siren for the drill:
children running, holding hands,
across the yard, descending
underground into the bunker. 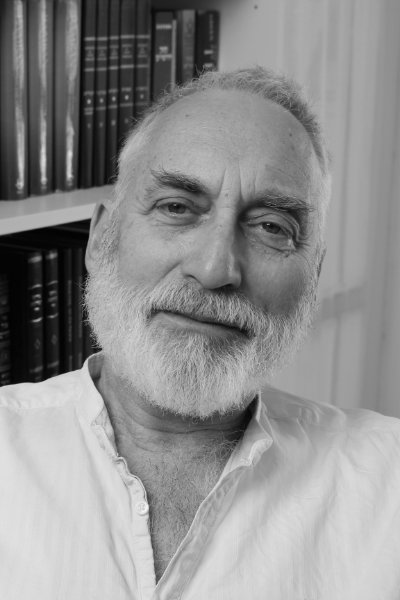 Brooklyn-born poet Steven Sher has lived in Jerusalem since 2012. His writing (primarily poetry, but including short fiction, folktales, essays, satire and features) has appeared in hundreds of publications worldwide and in 15 previous books including, most recently, Uncharted Waters (2017), The House of Washing Hands (2014) and Grazing on Stars: Selected Poems (2012). Recent appearances include European Judaism; The Louisville Review; The Midwest Quarterly; Mudfish; Muddy River Poetry Review; Prairie Schooner; San Pedro River Review; The Seventh Quarry; Spillway; Valparaiso Poetry Review; Veils, Halos & Shackles: International Poetry on the Oppression and Empowerment of Women; Proposing on the Brooklyn Bridge: Poems about Marriage; Amethyst and Agate: Poems of Lake Superior; The Second Genesis: an Anthology of Contemporary World Poetry; Mizmor Anthology and New Voices: Contemporary Writers Confronting The Holocaust. His work has been featured by Symphony Space (Selected Shorts) and Poetry In Motion, and was an Oregon Book Awards finalist. In 2018, he received the Glenna Luschei Distinguished Poet Award. He has also taught at many universities since the 1970s (beginning at Brooklyn College, where he worked with John Ashbery during his MFA), led many writing workshops (e.g., Poets House), lectured widely and served as an editor or consultant across the print media/publishing/literary spectrum. In 2017, he co-edited arc, an Israeli literary magazine featuring many of the best Anglo writers in the country. Find out more about his writing at: steven-sher-poetry.wixsite.com/writing