Constants of the Motion by Roald Hoffmann

In Roald Hoffmann’s latest poetry collection, he casts his inquisitive mind and love for words and syntax on the worlds he encounters. In a winter retreat in inland Provence, he ponders the long-cultivated land around, and its little treasures. Midst that beauty, he  cannot stop thinking of the wounds to his family in the Holocaust. Then, an intense interaction with the crafts community in the Penland School of Crafts in North Carolina leads to a strong set of poems. A commission to write a poem for 50 years of the Watson and Crick paper might be rejected; it still yields three good poems, as does  the puzzle of a Japanese mountain god who does not work at night, lest he frighten humans. Why?  The collection ends in the forests of the Santa Cruz Mountains of California, midst manzanita and redwoods, reaching for consilience.

Roald loves words, and the conjunctions of sound and meaning that can be woven from them. From wherever in the world he has been (and that includes a desperate time in his childhood), he brings back a abiding feeling of quiet beauty, of science and nature at peace with each other.

Tough beginnings,
but I’m not the
only one – torn
up, milled, sieved.
There were moments:
I felt hands round
me. And then fire.
Freezing me, till
you came, your lips.

Turn me, read in
my nakedness
marks of flame, salt,
air kept away,
the ghostly trace
of my support.
Look into me,
ring me. In your
gaze, I look back.

Nothing’s perfect.
Rough, a patchwork
of repair cracks
in the telling
heat. Let others
dress me, stories
of design. I’m
what chance put in
your hand. You’re mine. 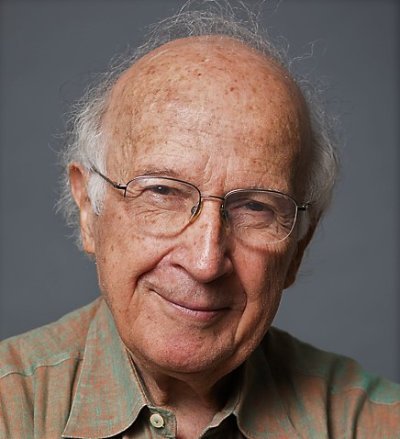 Roald Hoffmann was born in 1937 in Złoczów, then Poland, now Ukraine. After surviving the Nazi occupation and after several years of postwar wandering in Europe, he and his mother and stepfather made their way to the United States in 1949, settling in New York City. He graduated from P.S. 16, Brooklyn, Stuyvesant High School, Columbia University, and from Harvard University with a Ph.D. in chemical physics. Since 1965, Hoffmann has been engaged in teaching and research in theoretical chemistry at Cornell University, where he is now Frank H.T. Rhodes Professor of Humane Letters Emeritus. In chemistry he has taught his colleagues how to think about electrons influencing structure and reactivity, and won most of the honors of his profession.

Hoffmann is also a writer – of poetry, essays, non-fiction, and plays – carving out his own land between poetry, philosophy, and science.

Hoffmann had his first real introduction to poetry at Columbia from Mark Van Doren, the great teacher and critic whose influence was at its height in the 1950’s. He began to write poetry in the mid-seventies, but it is only in 1984 that his work began to be published. Hoffmann owes much to a poetry group at Cornell that included A. R. Ammons, Phyllis Janowitz and David Burak, as well as to Maxine Kumin. His poems have appeared in many magazines and several anthologies, have been translated into French, German, Portuguese, Russian, Spanish, Catalan (10 poems), Galician (6 poems), Polish, Croatian and Swedish. Six collections of his poetry have been published previously, including bilingual collections in Spanish in Madrid, and in Russian in Moscow. Hoffmann also writes nonfiction (five books) and plays (three plays produced).