Born With by Michael Daley

Born With, Michael Daley’s fifth collection of poetry, arrives in the era of pandemic, climate change, war, global inequity and impoverishment, and brings with it the scope of raw feeling and deep human connectivity through family histories and planetary calamities, as well as that depth of awe children discover from inhabiting the natural world. These poems, often lyrically-narrative and frequently elegiac, sing of loss, heartache and forbearance through the music of their cascading lines. They are nurtured in the same blood stream our ancestral artists, and we ourselves, were born with.

For some poets the poem is an echo chamber of sound, where the language of saying is equal to the language of meaning. This is true of Michael Daley’s poetry. His signature as a poet is a kind of wrought singing. There is a mystery at the core of Daley’s work; one can’t guess where his poems are going to go. He is an artisan of the present moment, where poems weave the political, the social, and the personal, as he moves easily between the narrative and the lyric. His poems inform us of what it is to be alive and alert to the nuances of presence. Robert Lowell once said: “A poem is an event, not the record of an event.” Or in Daley’s words: “how to say meant something more/than how to remember.” Born With is full of poems of praise and wonder you can live with. —Joseph Stroud

Michael Daley’s Born With appears on its surface to be a book of retirement, of settling old scores, of neatening up and setting the record straight. But the reader soon notices that it offers no letters of resignation, and instead is more a backhanded gathering of improvements and repairs, had we but world enough and time. In this book, Nature is everywhere, at the edges of clearings, in moonlight and shadow, just out of sight though well within reach inside walls–accusing, refusing, denying any easy truce with human failure. The title speaks to his life-long impulses and commitments, yet the poet deftly lays out his cards—growing up with its inevitable, sometimes unwelcome lessons, stretches of aimless roaming, then applying himself to the work without apology, coming to terms with time past just as he is growing old enough to feel superfluous. Daley’s close observations are a sweet and tart constant—as is his trickster’s sense of joy at eluding pursuit. Finally a compulsive truth-teller who will spell out early influences and temptations till he gets them right, Michael Daley sings songs of contradiction and refusal, of broken cries in the night that go on in spite of his best efforts to mend old wounds and set the world right. It is an honest unflinching work for these dark times, from a poet with the scope and skills to make the woods ring, then instantly welcome a drowsy but healing silence. —Paul Hunter

“Hidden in a tree’s annual deepening, / rings only begin to exist after the faller’s saw,” Michael Daley writes in this powerful new collection. Like the tree’s rings, the truths of our childhood are often revealed only in later excavation, and fearlessly excavate Daley does, returning us to an era when fathers had little to say to their sons, and hauling rocks together defined an intimacy shadowed by a quiet undertow of violence.  But even rock-hard childhoods and relationships can be redeemed, Daley reminds us, as he mines his past for the gold-flecked, shimmering moments that are in abundance in this collection, showing us the times that “truth that cut me clean through,” and that good poetry can cut close as any faller’s saw, revealing all the deepening rings. —Holly J. Hughes

Denied a Certain Reach for Joy

Hidden in a tree’s annual deepening,
rings only begin to exist after the faller’s saw,
in sweet fury, whines through a long afternoon.
The stones rattle an open secret in creek wash—
it’s the end of wishes.
In my own vulnerable youth
so much was lost to a disguise—
how to say meant something more
than how to remember.
I know I thought I knew what it meant
to be hidden and monumental
and go unnoticed in the actual sunlight
yet I let nothing torture future me
who now pores over the pitch-sticky scent
off two hundred years of newly born rings on a stump
looking for a day when the truth cut me clean through. 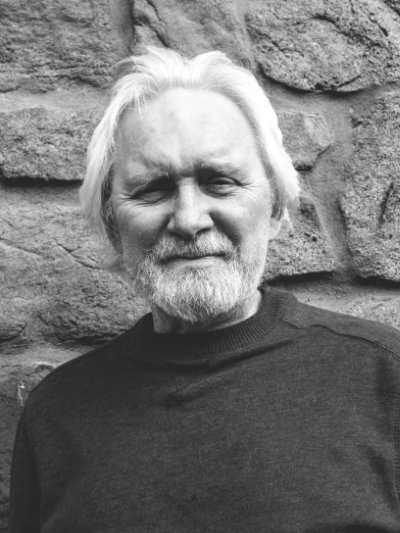 Michael Daley, who was born and raised in Dorchester, Massachusetts, entered a religious order as a teenager and upon returning to “the world,” was wild in the streets, protesting war and imperialism. He traveled the US on freight trains and by hitchhiking and worked at a series of depressing jobs until joining a tree-planting crew on the Olympic Peninsula and helping to found Empty Bowl Press. He later became a teacher at Mount Vernon High School in Skagit County and is now retired. He and his wife and son spent a Fulbright year in Hungary. He holds a bachelor’s degree from the University of Massachusetts and an MFA from the University of Washington. In addition to the Fulbright, he’s received awards from Seattle Arts Commission, Washington State Arts Commission, The Institute for the Arts in Boston, Bumbershoot, Fessenden Foundation, National Endowment of the Humanities, Artist Trust, and The Poets House Trust. He lives near Deception Pass in Washington.