Jeffrey Cyphers Wright is a leading voice of New Romanticism in the American Underground. His 15th book is a collection of stand-alone poems that combine to form a powerful portrait of a citizen, lover, family member, and seasoned artist. Blue Lyre will pull your leg and your heartstrings.

“I emptied two magazines of my .380 PPK at Jeffrey C. Wright’s bulletproof poems, and they didn’t make a dent. A poet true to his word and the Word, Jeff takes himself as seriously as a threatened world of fragile humans will allow. He is lyrical, attentive, and gracious. He is also civilized: Sextus Propertius in NY.” —Andrei Codrescu, author of The Art Of Forgetting: New Poems

“I’ve been a fan of Jeffrey Cyphers Wright’s poetry since the nineteen eighties when I first heard him read. He writes explosive poetry that always has a political edge. His new book, Blue Lyre, is a masterpiece and a must read for all his fans out there. Wright is a true original who has perfected his voice. His poetry is not only a record of our times but landmarks for future generations. Yes, he is that good.” —Hal Sirowitz, former poet laureate of Queens, New York

The late Jim Brodey once instructed me
on composing a New York School poem:
“Use blue and name a couple friends.”
This off-the-cuff take is on-the-button.
Here’s Larry Fagin in Complete Fragments:
“Brodey’s flashing bolt.
Yellow-pink-red-blue-green-black….”

Here’s the deal. Just wow. That’s it.
Ratchet the vernacular like the dickens
with Hippolyte mincing beside you.
Popinjay. Nincompoop. Ninny. Dolt.
Poppycock. Rubbish. Return to the fold.
For starters, try kicks, see what you get.
Rain hammers blue nails into dusk’s chest. 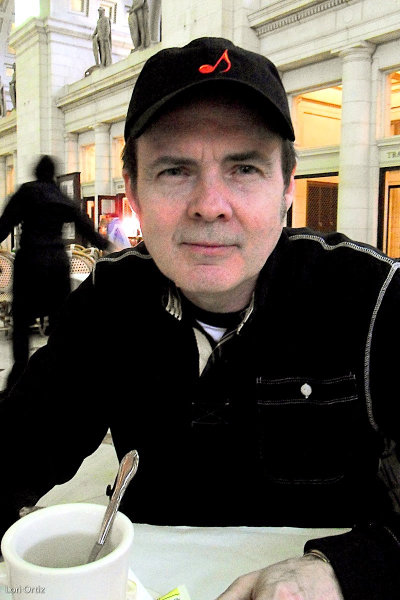 Jeffrey Cyphers Wright is a publisher, impresario, critic, eco-activist, and artist. He is best known as a poet. He received an MFA in Poetry at Brooklyn College, where he also taught. From 1987 to 2000, Wright ran a monthly review of all the arts, called Cover Magazine, the Underground National. In 2007 he began Live Mag!, a journal of art and poetry.

Wright has written art and poetry reviews for ArtNexus, Chelsea Now, White Hot, Tribes, and others. For many years he was a poetry reviewer for The Brooklyn Rail. He is now a regular critic for American Book Review. Poems of his are included in the anthologies Up Late; Thus Spake the Corpse; Out of This World; and Aloud. Currently, Wright stages events in New York City at KGB Lit Bar and at La Mama E.T.C. in conjunction with Live Mag! http://jeffreycypherswright.com