Translated by David A. Petreman

Marino Muñoz Lagos is the child of a sentimental and sad region of Chile, the south, which produced some of the greatest poets of all time. With all of the rain and long, dark winters, the poet withdraws into himself and becomes a friend of evocations and nostalgia. Marino once said that “everything is measured by the yardstick of nostalgia” and “we inhabit nostalgia as if it were an old house.” And so he engages readers with a sentimentality that combines his perspective on life—and death—while convincing them to open up their own lives. He speaks of old railway stations and the slow trains that carried away his best friends, a girl he loved and the voices of his childhood. He converses with wine during the long silences that death brings and imagines a communion with classmates who have long since departed. In line with many Latin American writers, he displays his solidarity with the poor, beggars, moneyless musicians, organ grinders and street people. He evokes the smell of bread on his mother’s hands and keeps her tenderness alive even after her death.  He speaks of the poets who come loaded with nostalgia and poverty in their pockets. And yet through all of the sadness he shines light on a promising future.

A GLASS OF WINE

With its purple solitude
wine accompanies me
and also there are my friends
who have disappeared forever,
the yellowed letters and the sound
of rain on the windows.

In the winter of this land
I converse with the wine
and sip by sip speak to it
about life’s sorrows
and the long silences
that death leaves us.

With this wine sadness invades me,
a blind cricket
changes my heart
and I return to faraway towns
lost in my memory.

And then I sink
into dreams
with my body exhausted and dying. 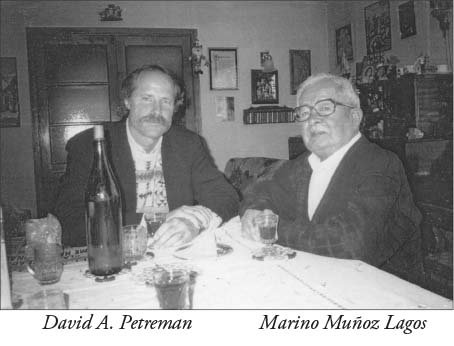 Marino Muñoz Lagos (1925-2017) is a Chilean poet with fourteen published books.  In 1971 he won the Municipal Poetry Prize of Santiago. In 1992 he was granted the Culture and Arts Prize. In 1994 he won the Municipal Prize for Literature in Punta Arenas and in 1995 the literary criticism prize granted by the National Council on Books and Culture. In 2001 he became a corresponding member of the Chilean Academy of Language, the same year he won the Patrimony Prize from the Foundation of Culture and the Arts. In 2004 he won the Presidential Medal for the Pablo Neruda Centenary. 2007 brought him the title of “Illustrious Citizen of Magallanes”. He was named “Illustrious Son” of Punta Arenas, Chile, the southernmost city on the South American continent in 2015. He taught school most of his life, and he spent over 40 years as a columnist for the daily La Prensa Austral and the weekly El Magallanes. His poetry has appeared in more than twenty anthologies. Fellow Chilean writer Nicomedes Guzmán once said “Marino Muñoz Lagos could have only been a schoolteacher. Fate, however, bestowed upon him a special merit: that of poet.”

David A. Petreman is Professor Emeritus in Latin American Literature at Wright State University. He has published several books on Chilean literature and translations of several writers and poets. His poetry can be found in Candlelight in Quintero (Dos Madres Press, 2011) and Francisco in the Days of Exile (Finishing Line Press, 2008).  He has published numerous articles on Latin American literature and also published poetry in many U.S. and Canadian literary journals. His poetry has won both regional and national awards in the U.S. Petreman has traveled extensively throughout the Hispanic world, including twelve trips to Chile, where he has given lectures and poetry readings. In 2001 LOM Ediciones (Santiago, Chile) published in a bilingual edition Marino Muñoz Lagos’s Los rostros de la lluvia/The Faces of Rain with Petreman’s translations.