As the Crow Flies by Henry Weinfield

Henry Weinfield’s poems are, like the bird of his title, dark and foreboding. Western civilisation, they appear to be telling us, has lost its way and now has nowhere to go. But this view is expressed in poems as articulate, elegant, learned and witty – in short, as civilised – as it is possible for poems to be. The contrast between Weinfield’s skill and what his skill is called on to express could not be more poignant. —Clive Wilmer

Henry Weinfield writes in the bracing but almost forgotten tradition of philosophical poetry. He is in brilliant conversation not only with the ironical beauties of modern masters such as Oppen, Rilke, Bronk, and Stevens, but with the unblinking admonishments of Lucretius, Gray, and Ecclesiastes. In his poems of reckoning, there is a fateful quality to the rhymes, which makes them not capricious but like bells ringing and then reverberating much longer than one had supposed they could. These are poems that insist we take the true measure of our times and of our own lives within them. —Stephen Fredman

A varied and richly rewarding collection. Henry Weinfield looks back with humility on a life spent teaching, thinking, and experiencing. He draws on his immense knowledge of literary tradition to craft beautiful poems full of wit and wisdom. His skillful rhyming redaction of Paradise Lost is a tour de force, and his personal lyrics are graceful artefacts which grow in depth and resonance with each re-reading. Above all else, he is attentive to the delights and challenges of poetic form. His poems pay homage to rhyme and rhythm, to punning and wordplay, giving the reader pleasure in the twists and turns of poetic language. By turns playful, sombre, questioning and gentle, his lyric voice is a perpetual undersong for days after one has finished reading. —Lucy Newlyn

“Eyeless in Gaza at the mill with slaves . . .”
Milton, Samson Agonistes

Eyeless in Gaza at the mill with slaves,
Digging our own and one another’s graves,
We have no access to reality.
I blame you, then you in turn blame me.
Subjected to our subjectivity,
We only see the things we want to see.

Eyeless in Gaza, can it be we still
Go round and round that dark, Satanic mill
In vicious circles, playing that old game:
I blame you and then you do the same:
I claim you’re a terrorist; you claim
That everything was yours before I came?

I blame, you blame—I blame you blame me
Goes on and on in perpetuity.
And blaming becomes bombing in due course,
So I bomb you bomb me without remorse;
And in bomb craters we can make our graves—
Eyeless in Gaza at the mill with slaves. 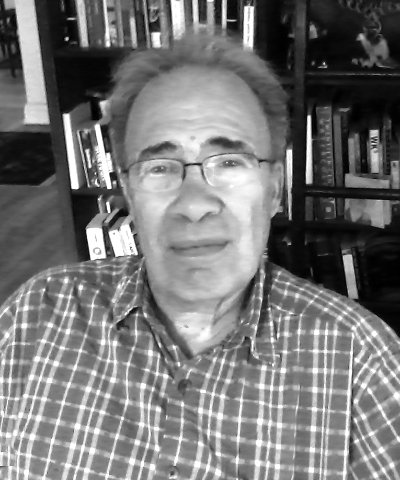 HENRY WEINFIELD’s most recent collections of poetry are Without Mythologies: New and Selected Poems and Translations (2008) and A Wandering Aramaean: Passover Poems and Translations (2012)—both with Dos Madres. In 2019, Dos Madres published his translation of The Chimeras by Gérard de Nerval, with illustrations by Douglas Kinsey. His other verse-translations include versions of the Collected Poems of Stéphane Mallarmé (1994), Hesiod’s Theogony and Works and Days (2006; done in collaboration with Catherine Schlegel), and The Labyrinth of Love: Selected Sonnets and Other Poems by Pierre de Ronsard, forthcoming from Parlor Press. Weinfield is also the author of The Poet without a Name: Gray’s Elegy and the Problem of History (1991), The Music of Thought in the Poetry of George Oppen and William Bronk (2009), and The Blank-Verse Tradition from Milton to Stevens: Freethinking and the Crisis of Modernity (2012). He is the editor of William Bronk’s Selected Poems (1995) and From the Vast and Versal Lexicon: Selected Poems by Allen Mandelbaum (2018). He is Professor Emeritus of Liberal Studies and English at the University of Notre Dame.