View cart “There Are Words by Burt Kimmelman” has been added to your cart.

Among the Enigmas by Robert Murphy

In Among the Enigmas, his finest collection thus far, Murphy has the courage not to impose himself on the language but to allow it to speak plainly from a deep well of feeling and conviction. Rhythm and rhyme mark his discoveries and render them at once luminous and concrete. These are real poems, poems that confront universal enigmas but nevertheless speak to us with a singularity and eloquence of their own. In his marvelous “Imp” poems, Murphy writes:

Who are we, anyway, to be so ill conceived?
I say it’s you, you say it’s me.
As if it were a secret vice to be a deceiver
Indistinguishable from the one deceived.

Robert Murphy knows what an imposter you are. He knows about your endless negotiations with the universe. He knows you are bluffing and how desperately you struggle with the terror of being found out. He’s not blowing the whistle, mind you-but he is going to make sure that you’re in on the joke that you’re making of yourself. Murphy’s is a voice, though, that can pull off this trick. Even in the midst of exorcising (exercising?) demons-which he quite literally does-there is a kindness, warmth and a wit that so many poets hope they will grow into but never do. Among the Enigmas is a lovely, authentic book and just what you need after another long day of faking it, “As if it were a secret vice to be a deceiver/indistinguishable from the one deceived.” —Geoffrey Woolf

For Murphy, dreams are our “true familiars,” the ones who would prefer to turn us “inside out.” The ancient, unreconstructed, power of interiority, the source of vatic poetry, is Murphy’s true god, not the cold comfort of “The body lifeless. The body born again.” Always retreating to his family of enigmas, Robert Murphy is not going quietly “To the brink, the cliff edge/…to slaughter.” —Tyrone Williams

Murphy speaks to moral complexity, and does so playfully, subverting clichés and laying out mysteries. Among the Enigmas presents witch trials that could be taking place in the present moment; the sleeping princess whose consent we’ve always taken for granted; the cow whose story-end is taken for granted, too; a modern Puck (Imp), perpetually dissatisfied; and flowers that, surviving the man who planted them, are “never to be in the same way seen.” —Deborah Diemont

To spend time with Robert Murphy’s Among the Enigmas is to be in the presence of a great soul. At the center of Murphy’s vision – for he is, make no mistake, a visionary poet in the line of Blake, in touch with truths that exist far beyond the page – is a battle between stasis and dynamism, between appearance and reality, between Truth and a diversity of truths. —David M. Katz

The poems here are paired with many wonderful works by the visual artist Donald Golder. The mostly ink and watercolor images seem to occupy a subliminal space somewhere between fairytale illustration and the surrealism of Max Ernst. The dream world they describe sets a tone appropriate to Murphy’s work and the two enhance each other in this beautiful volume.

Together, Murphy and Golder’s collaboration allows the reader of Among the Enigmas to transgress the porous borders between the living and the dead, between landscape and interiority, and finally between Self and Other. Somehow, we learn in due course, “We are who we say we are.” —Steven Winhusen

What did he want to hear,
As much as he could bear?
Not the excuses.
Not the reasoned
Why of it, but
What was always
True to its word.

Out of the starlight,
Out of the stardust
Of its enfoldments:
Not the keening dead-
Not these ghosts
Locked in the unutterable . . .
Voices busy in his head. 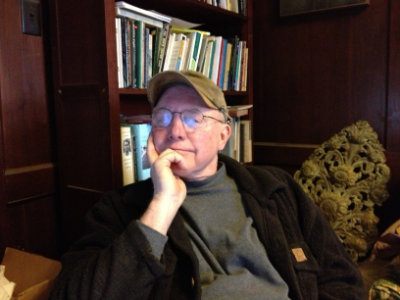 Robert Murphy’s poems have appeared in the literary periodical Smartish-Pace, as well as the Colorado Review, the Notre Dame Review, The Cultural Society, Marsh Hawk Review, Galatea Resurrects, Live Mag!, Prints into Poetry, Merle as Muse – Poetry Inspired by the Art of Merle Rosen, and the Chicago based journal LVNG. He is the author of a chapbook Not for You Alone, (Dos Madres Press, 2004), Life in the Ordovician – Selected Poems (Dos Madres Press, 2007), and From Behind the Blind (Dos Madres Press, 2013).

Over the past few years my focus has been to explore the intersection between intention and chance. Sometimes after making a series of random marks and passages I’m tempted to believe that I can exercise choice by rejecting some and retaining others. Sometimes I see images in the marks and believe I choose to develop them. Sometimes it seems I choose to prefer one painting or drawing over another.

Perhaps this is a pointless exploration though when you pause to think about it because even intention is mired in chance. At the very deepest inflection point between one choice and another it’s nothing other than chance that flips the switch.