A 24 Hour Cotillion by Leonard Trawick

In A 24-Hour Cotillion Leonard Trawick has chosen what he considers his best poems written over five decades, many of which have appeared in various anthologies and magazines but have never been collected in a single volume. He justifies the title by pointing out that, like the French dance, many of these poems employ intricate formal patterns—villanelles, rondeaus, ballades, sonnets, haikus, and the like. There are also looser forms—blank verse, free verse, prose poems, and nonce devices. The subject matter is similarly varied, ranging from old age and death to love, nature, family life, and the arts. In one section the poet recalls scenes from his growing up in the Deep South; in another he indulges in verbal riffs and a playful surrealism. The persona in some of the poems is that of a detached observer, presenting ideas at times in a serious manner, at times ironically or satirically; in other pieces the speaker is autobiographical, addressing a loved one or narrating a personal experience; and several poems are in the voices of dramatic characters clearly distinct from the poet. The diversity of form and content just described perhaps sounds more like hopscotch than a disciplined line dance. But taken all together, the collection choreographs the imaginative outlines of one poet’s life.

Even in daylight, in murky waters,
as the ooze slides between your toes,
you can sense them around you, cautious,
curious, nosing up close,

and often, swimming at night, you feel
small ones nip at your flesh,
then flick away with a little swirl.
But to make your catch,

lie in the dark on a weedy ledge
where the bank drops off sharply,
and troll your arm over the edge
into the blind water.

You’ll feel them nudging, cruising about;
then one will strike your hand: quick,
cock your thumb in the gills, hook
your fingers through the mouth

and wrestle the slippery, thrashing thing
out of its element into your own.
Later you’ll find raw streaks the teeth have torn
and aching little holes from fins,

but you’ll never use hook or net again;
you’ll keep feeling back into black water,
and one night sooner or later
you’ll wade out deep for the big one. 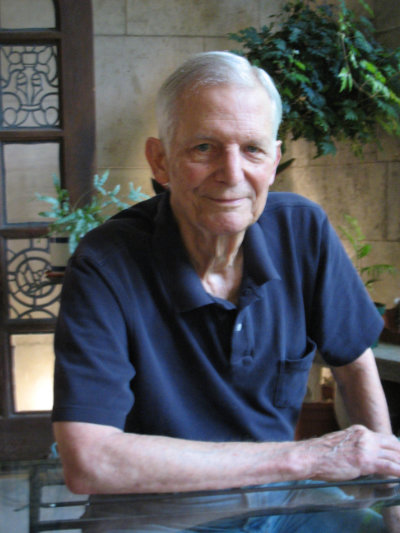 Leonard Trawick grew up in Alabama, a child of the Depression and World War II. He attended the University of the South (Sewanee) and received graduate degrees in English from the University of Chicago and Harvard. During the 1960s he taught English in the graduate school and the School of General Studies at Columbia University. In 1969 he and his wife Kerstin moved with their children Eleanor and Matthew to Cleveland, Ohio. From that time until his retirement in 2000 he taught English literature and creative writing at Cleveland State University. For twenty years he was principal editor for the CSU Poetry Center, eventually editing some 120 poetry books, many of them the first volumes of young poets who went on to stellar literary careers. He was founding coeditor of The Gamut, a general-interest quarterly journal sponsored by CSU—a position he held for twelve years. In addition to two chapbooks and poems in a number of magazines and anthologies, he is author/artist of Beastmorfs, a collection of concrete poetry using various forms of this genre. Since retiring, he has pursued his lifetime avocation of drawing and painting.