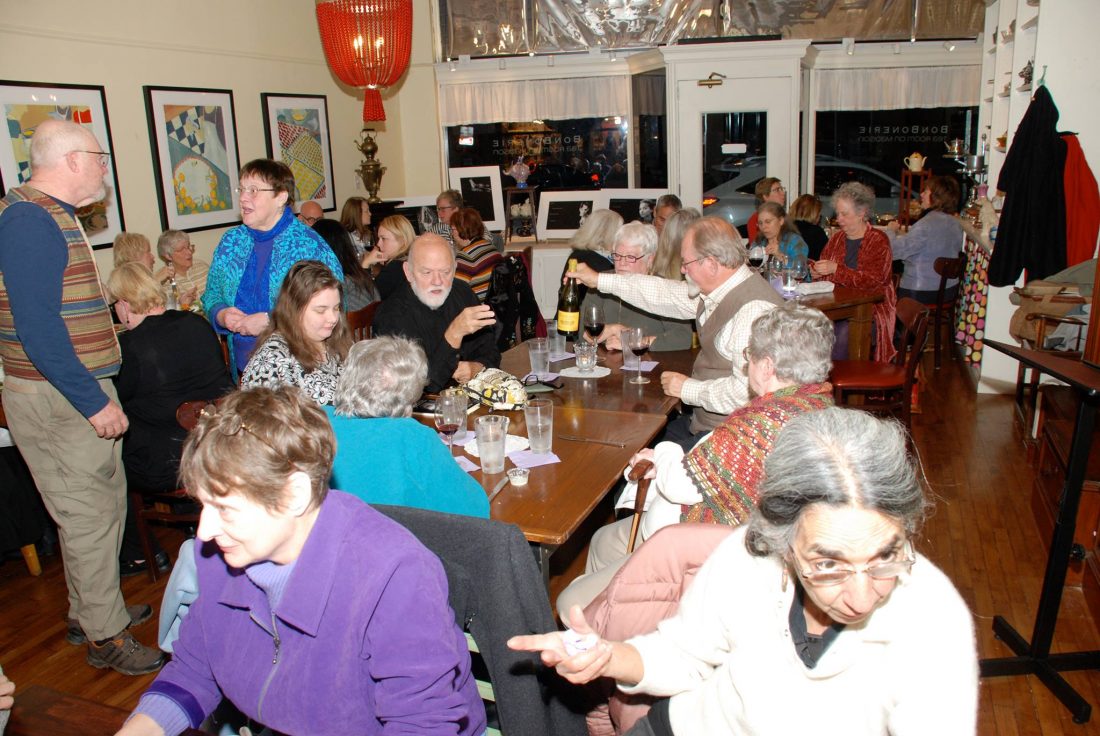 Hosted by the Bonbonerie, the Poetry Lover’s Dinner Event featured three magnificent poets from the Dos Madre’s roster. Susan Glassmeyer, Pauletta Hansel, and Megan Hanson were assembled to read from their most recent books.

Dinner and drinks amid the Bonbonerie’s elegant new tearoom led to an evening of poetry which found inspiration in struggle, pain, and loss. It is a testament to the power of art and poetry that these themes find their way into poetic forms which are strikingly beautiful. As we came to see, it is elegance of form which perhaps best reassembles the pieces left from struggle and pain.

Robert Murphy led the evening in general introductions. Talking about gathering amid such a peaceful and beautiful space amid the ordeal of life, we came to find ourselves potentially making life itself a work of art with our collective commitment to a night of poetry. This could serve as a metaphor for the entire evening.

Susan Glassmeyer led the readings from her book entitled Invisible Fish. These poems are largely drawn from her experiences practicing holistic healing, and the theme of pain broke through in everything she read. The poem “The Art of Imperfection” stands out as something of a summary for her reading.

Using the idea of the Japanese art of Kuntsugi in which pottery is repaired using a gold lacquer, thus rendering the pottery more beautiful for having been broken, the theme of pain finds a heroic voice in this poem. Having suffered and survived, and now being stronger in some ways for the ordeal, pain becomes “the flaw with golden joinery,/ to imbue defect with dignity…/ to crown the injury.”

Pauletta Hansel sustained the tone of the evening as she read from her collection, Palindrome. She described the book as a memoir of her mother as she fell to dementia. The book is a mix of poetry and journal entries, these latter satisfy every definition of the prose poem.

In the poem “Portrait of My Mother as a Dried Sunflower,” we were offered an image which captured so much of this powerful memoir. The poem offers sensory images through which we can see and feel how a withering life resembles a dried sunflower, retaining vestiges of beauty and life even as it dies. Yet, the final image, one which emblematizes everything Pauletta shared with us, is packed with immanence: “You are beautiful./ At the center, a constellation of seeds/ Never planted.”

This is not a metaphysical image. These seeds filled with future life are the tangible world of the living even amidst such profound loss. Like Susan Glassmeyer’s poems of pain and the beauty gained by repairing the breaks, Pauletta’s poems were fraught with loss and grief even as they offered us hope and promise, finding the poetry in being witness to the end of life.

Finally, the capstone of the evening was Megan D. Henson’s collection of poems called What Pain Does. This collection also contains the magnificent photographs of J. Michael Skaggs. Large prints of some of these photographs were on display in the tea room. Never letting up for a moment on the theme of the night, Megan read poems that walked us through profound struggle and physical pain.

Of the poems Megan read, the poem “Ancient Pain: A Different Kind of Sestina” stood out. Her choice to utilize a formal structure—a structure she consciously manipulates (echoing perhaps the manipulated photographs of J. Michael Skaggs) seems to embody so much of her work and the spirit and theme of the entire evening. By wrapping the chaos of physical pain into a formal structure, we see the ways art and poetry have the power to return us to life and living. The songs of the old Cherokee hermit woman who figures variously through this poem outlive the pain and violence which also intrude in the poem. No matter the struggle, it is the form of the “ancient Cherokee songs” which continue to reverberate, and the rhythm of “silent feet” which still make the world tremble. The sestina, crumbling deliberately under Megan’s pen and just as deliberately reconstituted, serves as the form of this gathering.

All of us assembled to hear these poets read about struggle, pain, and loss within such a beautiful formal setting, heard the language of loss as we came to understand just a little more clearly how the arrangement of art and disorder are really the essence of living amid the ordeals we inevitably face. And the arrangement of all of us, no matter how random it may seem, will find our way to a sense of community. Here was the art of poetry and the art of being human.