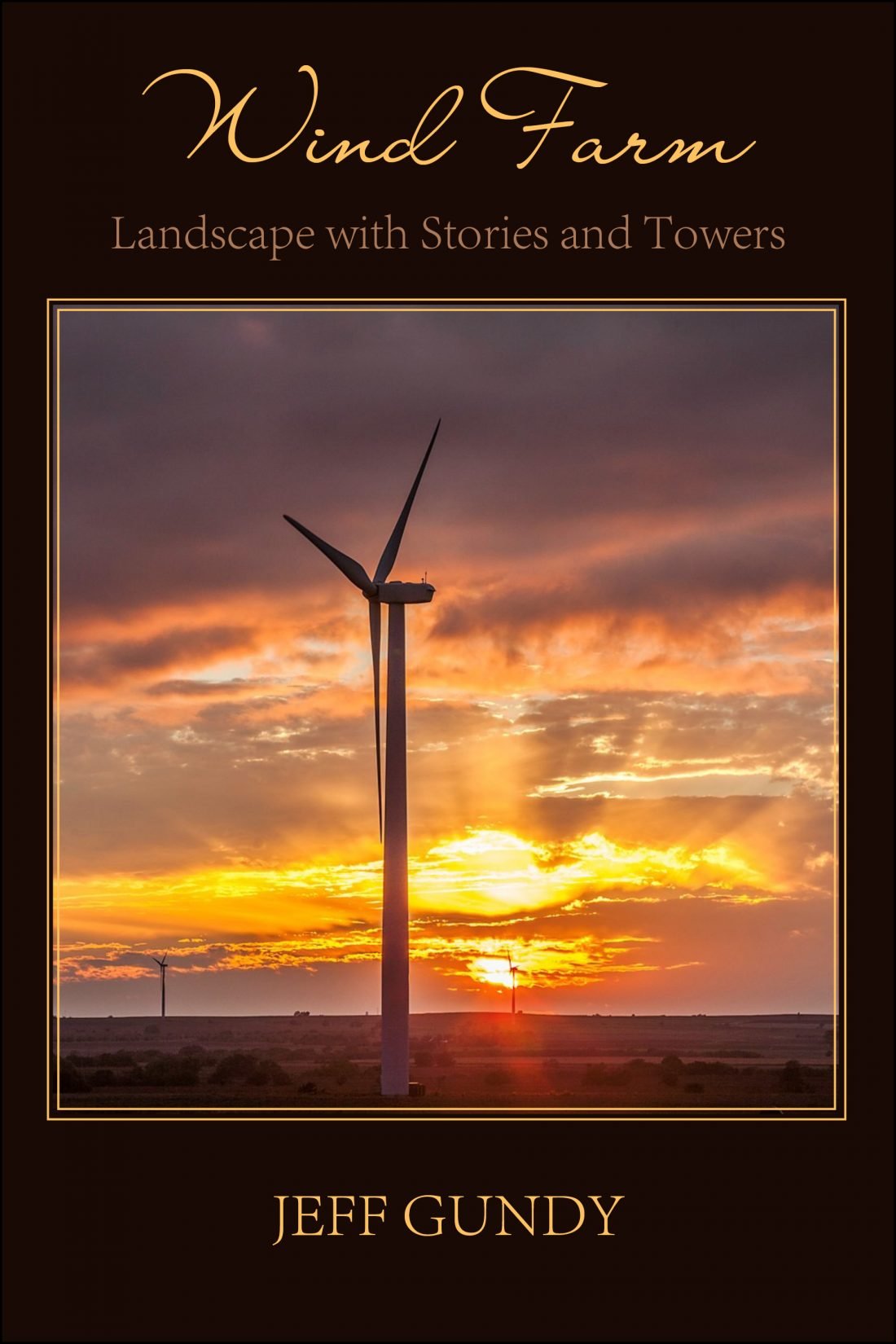 In Jeff Gundy’s Wind Farm: Landscape with Stories and Towers, we get to travel from a nearly anonymous small rural town somewhere in the rural Midwest all the way to Alpha Centauri. We learn about parsecs, and we learn how to remove a few tons of chicken crap. We move freely through time from the present day, back through the turbulent 1960s, and all the way to the murky unknown and unknowable pre-history of what we now call the American Midwest. To this end, his book has more in common with Italo Calvino’s Invisible Cities referenced by Gundy than the author would admit. As when he tells us that the “wind farmer… would like to be Italo Calvino, author of a brilliant book about a fictional Polo and Kahn” (25). Gundy is perhaps too modest since his collection of stories and towers creates the magical cities of corn and soybeans that are otherwise invisible without the touch of a poet and writer to bring them to life.

About midway through the book, Gundy offers a point that is worth a pause: “Anything looked at closely enough takes on a certain aura, in the right light, from the right angle” (95). This is to say that the most mundane things will offer up meaning, metaphorical content, and significance that are not immediately apparent upon a cursory or habitual glance. But the opposite is just as true. Looking at things long enough renders them invisible. The sprawling fields of corn and soybeans of the Midwest turn into blank spaces after a while, and the space itself will turn into little more than empty space that exists purely to be overcome by the highway that runs past it or the county roads that run through it. Gundy’s observation appears to be at the heart of his entire book: the invisible cities of corn, soybeans, and the people whose lives emanate from these places will take on a certain aura, and with the touch of a poet, their significance will become much more than the mere fact that they simply exist. Otherwise, this region in the American Midwest, all of its people, and the stories attached are of the same order as the wind that drives the wind towers which now dot this landscape and generate power from an invisible source.

Gundy explains that the landscape and the grid of roads offer nothing other than their bare existence until someone comes along and assigns such value. This could stand as a metaphor for his book insofar as there is nothing until the names and the stories are told by someone who looks at it all long enough to discern the strange aura attached to it all. And the danger remains that the reverse can easily happen, that everything will simply disappear into oblivion without the names and the stories. Gundy reflects on the anonymous numbered roads which crisscross the landscape, designated by nothing but numbers and he wonders how these roads could ever gain the distinction of names: “How could they be named when they have no history, no folklore, no stories of what happened last year, last century, in the dreamtime? The elders who remember the old days are gone, their children have gone too, working fast food or the prison or in hospitals. The whole prairie is nearly bare of names, and as thinly storied as it is peopled” (36). It is not really the thing itself, it is the telling of the thing that matters for Gundy and for us. As another writer of time and the land, Graham Swift, once said, “Reality is that nothing happens.”

It would be an offense against the book to attempt to categorize it. Wind Farm: Landscape with Stories and Towers offers elements of memoir, natural history, American history, and even cultural history. There are chapters that stand alone as poems. If I followed my worst inclinations, I would allow myself to digress into eco-philosophy and even a little Marxist critique, but these are my failings, not the author’s. But all of these elements are clearly present in one form or another. The presence of the wind farm itself cannot be anywhere near as neutral as the individual isolated wind towers themselves. Gundy explains: “Some people call them ugly, most for reasons that have nothing to do with aesthetics. I always suspected the resistance to wind farms was both more and less political than most people want to admit” (3). But when it comes to such observations, Gundy is just as hard on the modern industrial farm: “If it’s ugly we’re talking about, we need to talk about the whole enterprise of industrial agriculture, the gridded landscape and the skinned prairies turned into monoculture, herbicides, pesticides, chemical fertilizer, all the rest.” Elsewhere he describes the prairie lands as an “inland ocean that once covered thousands of square miles” and has now been transformed into “something more rectilinear,” a geography transformed into something like the “utterly artificial landscapes in the old movie Tron” (57). It is no accident that Gundy uses an image of a soulless digital landscape devoid of nature and life.

But it is with the attention to language of a poet and the careful use of metaphor that Gundy’s work becomes something more than an eco-critical evaluation of the American Midwest prairie lands. His reflections on life and family infuse this region with a soul that may come as a surprise to people who are not familiar with this part of America. A chapter title such “The Wind Farmer Reflects on Great Symphonic Fullness & Sparse Habitations” has the ring of something out of the Romantic tradition and the poets of nature. It is this chapter which offers us the following lines: “One cannot imagine the wind farm crowded, except with corn, which makes its temporary monotonous green cities each summer. Fills the air with sticky-sweet, sexual pollen, crowds closer than any crowd on a ferry or a sidewalk, brazen, single-minded, claustrophobic.” (145). It is not simply that Gundy infuses the otherwise non-descript fields of corn with life and culture, the alliteration that carries the language renders this reflection more than the thoughts or images described. Like the aura of life and culture Gundy imparts on the fields of corn, the language of a poet lifts the words from simple rhetorical exposition into poetry. Form animates content.

Again, it is nearly impossible to say what Wind Farm is “about” because it is about everything. It is about the stories of people and the land that seem to emanate from an oblivious landscape while it situates those people and that landscape as the center and circumference of the world. It is about his late father, the man whose name was on the high school walls for his achievements on the football field and the man who farmed this land but now walks with a four-pointed cane. The book is about the prehistory and the unknown people who built the mounds that dot the midwestern landscape. And Wind Farm is about modern industrial farming and alternative ways to occupy the land. Yet, Wind Farm is about early love, childhood confusion and awakening, rock and roll, and even guitars (he mentions a 1960s Gibson Melody Maker that I would just about die to have for myself!).

But maybe Wind Farm is simply about the invisible life and lives that make it possible for all the great and distinctly visible lives to go on being visible. The wind towers now stand silently over the prairie lands. They occupy little space, but they are distinctly visible. It is the land beneath that has no voice other than that of poets and storytellers. The wind towers turn and send signals into the earth which connect to an invisible system that generates power to places near and far. Its own power is silent and invisible. And to so many people beyond the anonymous Midwest, the prairie lands remain silent and invisible. As Jeff Gundy tells us: “poetry does not appear out of thin air.” Neither do people, and small towns, and the great corn and soybean fields that feed so much of the world. Gundy does not write of invisible cities. He writes of real people, even those who have disappeared into prehistory. Scholars like to pigeonhole things like Jeff Gundy’s Wind Farm as “regional literature.” I, for one, am rather tied of this designation. As one who writes frequently about the Midwest and about Appalachian culture and literature, I think it is time the world learned to understand itself in relation to us, not the other way around. If you ate some bread today, thank one of us. If your lights are on, maybe it is because of a wind farm in some anonymous expanse of corn and beans. New York and Paris are just as far away from Alpha Centauri as rural Illinois. There are many messages one can take from Jeff Gundy’s Wind Farm, one of them is that everything exists in a complex of interconnected systems—to the land and to each other, and we come to know this by taking a little time to look at things long enough to begin to see a certain aura.