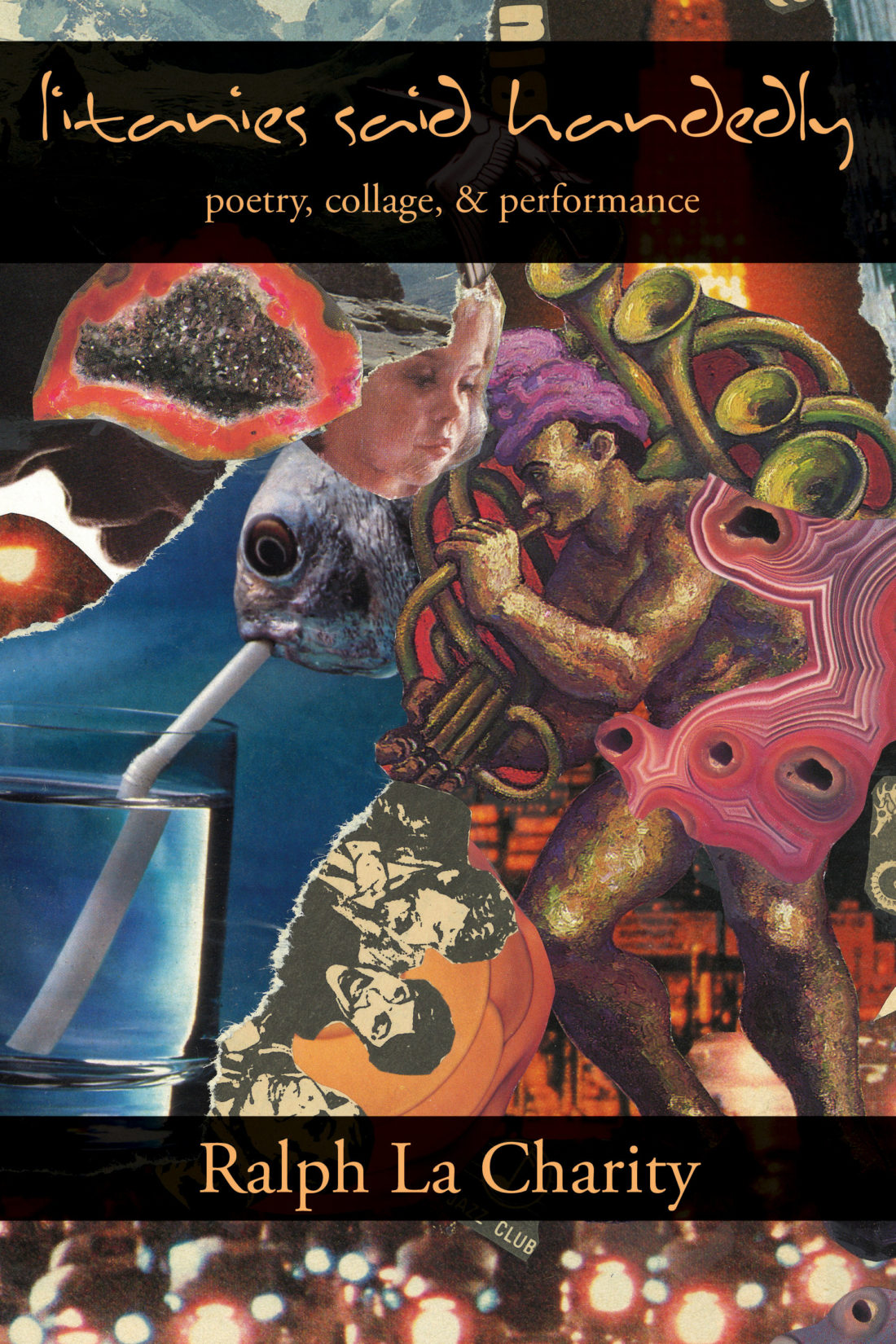 After reading Litanies Said Handedly by Ralph La Charity, I decided to reach out to the man himself and see if I could get some of his thoughts in the form of an interview. We have corresponded intermittently over the last several months via Facebook Messenger. If the questions lack a clear line of thought, the fault is all mine. For anyone who has been lucky enough to witness Ralph perform his poetry, you will understand that keeping up with him is part of the experience.

I began with what I thought was a straightforward and timely question, one that resonated with older questions but may have found some relevance in the cultural climate we live in today. From there, things progressed—or, should I say, the conversation went in directions I could not foresee.

Mike Templeton: Is there power in poetry in the time of Trump?

Ralph La Charity: I would not as poet presume to untangle the various lunacies that prevail in the body politic. My sense of my own lot as poet is to carry the weight of this vocation fully aware that while my medium is the native tongue I was born to, my capacity for determining the various directions and resonances my particular talents might pursue therein and thereby is extremely contingent and preclusive, almost as its condition. Nor am I in control of intention. The poetry I usually manage to record feels as alien as it does miraculous, or at least that is how it feels when in the course of a given composition I come at last to that wholly desperate awareness that signals in all due humility that it is time to recognize that most of what a given composition proposes was unimaginable at the outset, and that it remains unimaginable at the final/final point of abandonment all such compositions eventually arrive at : my poems don’t mean. They either become themselves or they are stillborn. I move on. The body politic typically finds said propositions incomprehensible and literally beyond the pale. I wish them well, as fellow citizens, but do not address them, not as arbiters of the wonders of such creative acts.

MT: I like your point that what a composition proposes is unimaginable from the outset. It is as if the object of the imagination is just beyond the capacity for language to capture that object. Do you think poetry as performance, and the temporal nature of this kind of poetry, are more relevant now than ever?

RLC: Not everybody feels the vocation the same. There are degrees and gradations galore, not to mention overlapping discomforts and distractions impinging insistently, a thematic complexity one attempts to gingerly dance either within or around, somewhat of a between-the-raindrops helplessness as the storm moves in. There really is no place to hide, however, is the given some of us accept as a duty-bound conditioning agency, an omni-surround of sorts that one either welcomes, as the composition’s breath and pulse, or is oppressed by or maybe even just tries with a shrug to rise within, rather as if the storm itself calls the tune and the poet’s obeisance to that tonal imposition and under-ridden rhythmic charge is as much the composition’s glory as its doom. A bit melodramatic, quothe the interlocutor ? My own tack is to welcome, which is how I embrace your second sentence’s uncertainty constraint : the poet camps out at the end of the road, inhaling uncertainty blindly, a captive to uncertainty, celebrating uncertainty’s inevitable swirl and accompaniment. Yes, it is uber-dramatic, at least is that when one attempts to translate the occasion in call and response situations such as this one, wherein one’s interlocutor prompts and the poet seeks to allay and interpret. As for performance, that is even more potentially harrowing, since one has agreed to expose oneself in all one’s vanity, standing and delivering before mute witnesses who have no more idea as to where you as poet might be going than you do… the only given in the performative circumstance is the one that goes, Yes – on some very crucial level, even vanity will be vanquished here ! More relevant now than ever ? Most assuredly. None of us have a choice is the bottom line, for the one who delivers, equally for those who bear witness. Why else is poetry’s imminent Death ever the reigning cliché that overhangs such queries as yours, Michael ?

MT: The poet Jack Micheline said that the working class would relate more to poetry if they were not so distracted by television and other spectacular diversions. Do you think poetry speaks to/for the working class? Or, maybe in more contemporary terms, does/can poetry reach people today who are consumed by the so-called information age? Younger people, for example, who are so tied to electronic media?

RLC: Jack didn’t exactly say a mouthful with that one, given the construction site difficulties in voicing sonnets from under collapsed fresh concrete up on the 7th floor, given that distraction & diversion are such necessary defenses against the spew of unlyrical stupor the overworked minions over at the Amazon warehouse are dealing with, given the swill of swinishly metered ritmo-muck the non-union & frequently stiffed contractor-employed immigrant grounds laborers & kitchen staff at the latest billionaire-ballyhoo’d golf resort have to wade thru, well gee… no, I for one don’t think poetry speaks to or for them. Jack was pretty disgusted with the working class is how it looks from where I sit. In his late 60s, Jack died on the Bay Area Rapid Transit, possibly either before or after having visited a local racetrack — Jack loved the ponies. It’s not known how long his corpse rode the rails before it was discovered. No winning ticket was found in his effects, not even a scribbled-on program. As for contemporary youth besotted by tsunamis of info, they would seem to have more whirlwinds of mediated source-nodes reaching them than the ancient art of poetry would choose to document, near as I can tell. Poetry’s an unstabled, Moon-besotted pony that consumes indigestible oats contemporary youth roundly eschews methinks — poetry ponies die daily never having tasted the info contemporary youth electro-mainlines by the hour, moment to moment. You are what you eat, quothe the Echo — and the ties that bind’s a crumbly biscuit meme even the smartphone eschews.