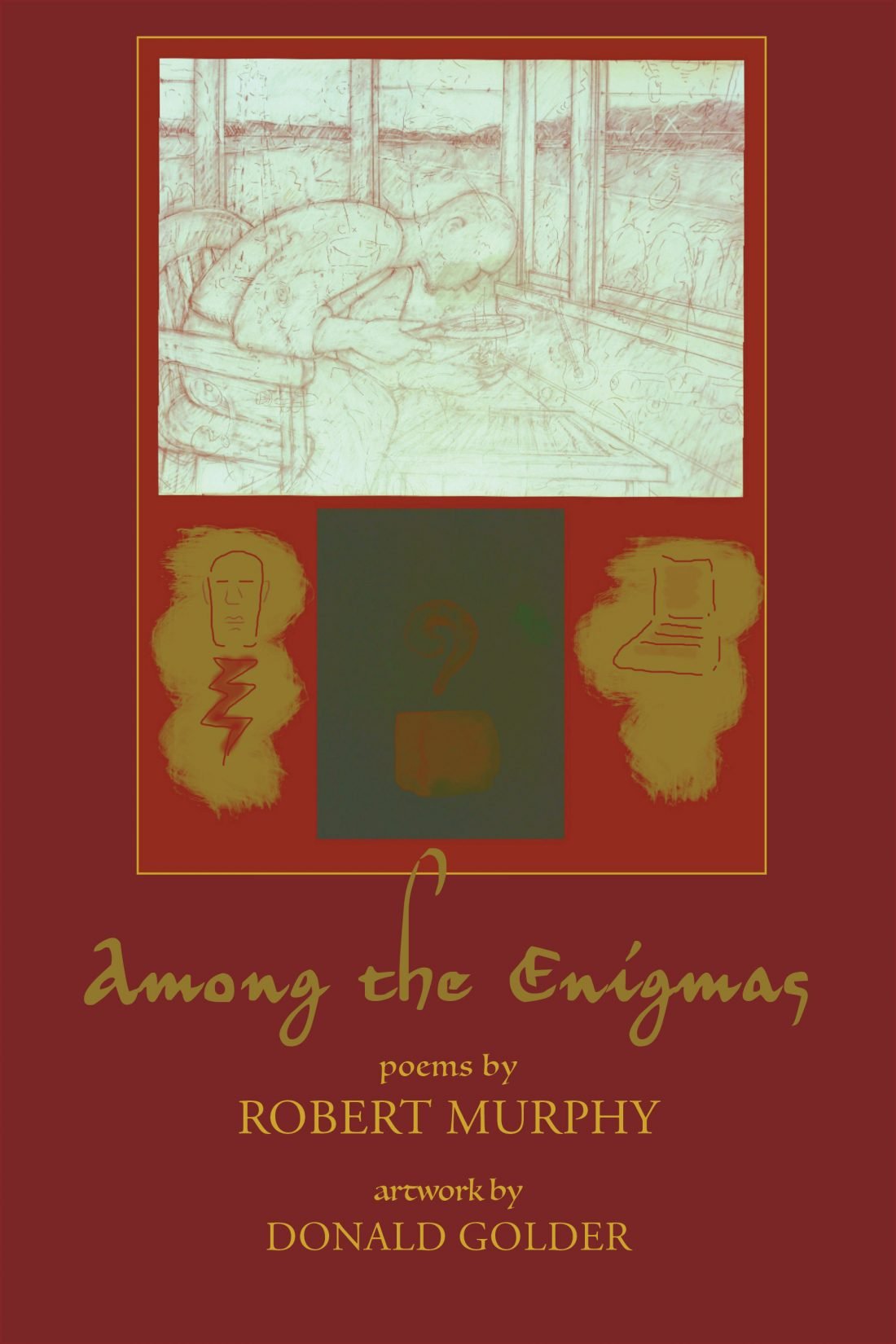 I suppose I need to state at the outset that I do not write this post as an objective reader or observer. I was pulled into the poetry of Robert Murphy a long time ago, and his new collection, Among the Enigmas, serves only to render me a more loyal follower. Even Robert’s emails to me constitute a poetic form in themselves. I think what enchanted me a long time ago, and keeps me in the spell now is the feeling when I read Robert’s poems that I am making contact with a literary tradition as old as language and a contemporary force that grabs the present with a sense of shocking immediacy.

Hearing Robert Murphy read from Among the Enigmas at Xavier one could hear a voice that is part ancient Bard (think Yeats reading “The Like Isle of Innisfree” but not quite as dramatic) and part contemporary philosopher complete with all the ironic distance that comes with the present age. However much the poems may undermine the metaphysics, Robert Murphy’s voice seems to conjure all things metaphysical and enigmatic. As Norman Finkelstein said in his introduction at Xavier University, Robert Murphy can be something of an enigma himself. Since we are reading a set of enigmas presented by an enigma, we are pretty far down into the cave. But that is always where things get exciting.

In his review of the book, Dennis Daly tells us that so many of the poems in Among the Enigmas capture the Existentialist resistance to a fixed sense of self—the “I think” from Descartes. Daly tells us that Robert Murphy “concocts his “I” as a dynamic, but empty, container of sorts” so that a transcendental position can never be found. I found this line of thought to plunge to the level of language itself. “The Practice” stands out as emblematic of this distinctly contemporary problem of language. The poem tells us “we have names/ For everything under the sun,” but all these names seem to remain “On the tip of the tongue,” not quite as present as the things they are meant to name. Robert read this poem with a measure of understatement that could have given a sense of resolve as much as a feeling of being lost in the problem. Tone of voice is just as indeterminate as words on the page.

Just spend some time with a title: “Those in control of what you think you know, Know your favorite watering hole” and you can get lost in the play of shifting referents. The words lead us in a direction and suddenly trick us with the placement of a comma. From this short poem, we are offered an age-old question, is the glass half full or half empty, only to have it evacuated of any firm way of even dealing with the question. As we hang our faith on language itself, the poem seems to unscrew the peg on which that faith was held. We are left with “No glass, no empty, no full.” Enigmas indeed…

The collection also includes artwork by Donald Golder. The drawings and paintings range from playful but haunting line drawings to complex works in paint that will remind you of Klee, Twombly, and even asemic literature (I cheated and looked up Golder’s work on Instagram. A word of warning: you will get sucked into this world pretty fast). Although Robert explained that the artworks were not necessarily meant to fit the poems, they certainly offer appropriate enigmas to work with as we read through the collection.

Again, take my words for what they are worth. I am a Robert Murphy fan. But I think all of us who get to read the works published by Dos Madres Press are necessarily Robert Murphy fans. It is a rare treat to take in a collection written by the Editor himself. I keep telling myself to collect all those Robert Murphy emails into a volume of found poetry. I will, of course, seek permission from the author. Until that time, we have Among the Enigmas to provide us irresolvable puzzles, modern mysteries, and even an Imp in a bottle.