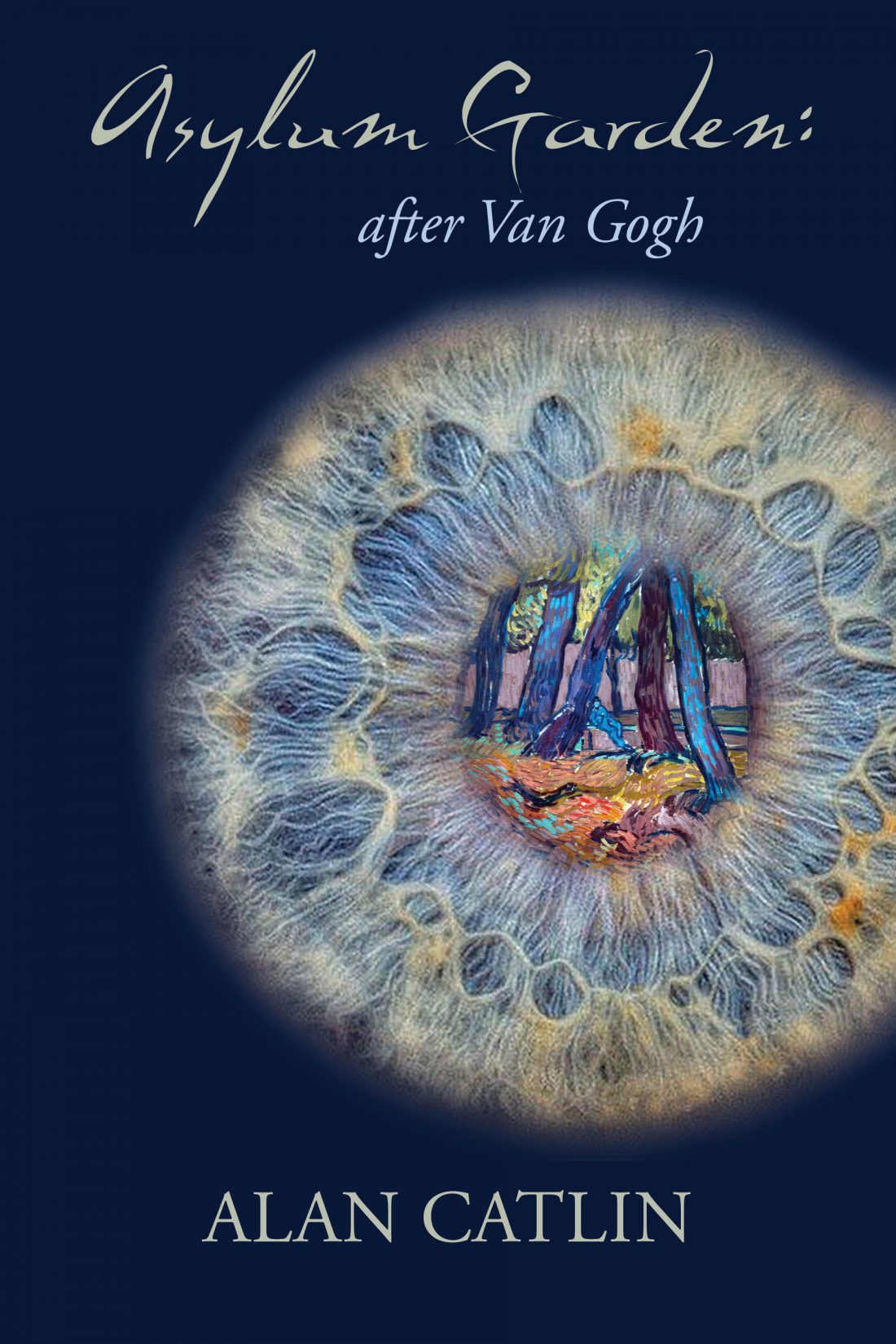 I am loath to use a well-worn literary term to describe a working poet, but Alan Caitlin’s poetry keeps forcing the idea of imagism throughout much of Asylum Garden: after Van Gogh. Perhaps if we skip the obvious associations with Pound and use the words of philosopher and poet T.E. Hulme who said that “images are not mere decoration, but the very essence” in poetry, I may find a sense of peace with the term.

The Van Gogh poems are the obvious place to start as these poems offer stark impressions of the works of Van Gogh. It is tempting to look up the paintings as a point of reference, but I think this is a mistake. The poems are the object here, and the images are found in the sparse language of the poetry. Cailtin forces us to give up our reliance on the visual and find clarity in an altogether different mode of sensation. “Vincent #8: Rare Watercolor” is a perfect example. The opening lines are disorienting. Any sense of place is dislodged from points of orientation. We are in a “Landscape with newly/fallen snow” as the line break cuts the fallen snow from the stark declaration of place. The setting is a no-place; it is simply “landscape,” and this is painted with the blank white of fresh snow. We can experience the presence of a natural object, but Caitlin’s refusal to embellish creates the problem of absence. The poem enacts the movement from looking at a visual object to the poetic rendering of that object in the form of words on a page.  The force of the image is supported at least as much by the absences surrounding the objects as the objects themselves.

If there is anything that takes on the form of action in this  poem it is the solitary traveler in the center of the poem:

Dormant fields and a lone

traveler walking into a head wind;

The fields lie fallow as an indistinguishable figure makes its way through the stillness and stark landscape. Sparse language strips the moment of animating features and this renders the image itself—“the very essence”—to consume the reader’s imagination. The poem abandons us in the end as we are left with “Long cold night ahead,” no period. The lack of punctuation is a key feature of how I came to read these poems. Empty space, indeterminate punctuation, sparse language—all of these features draw attention to absence. If the language, the words on the page, work to render essential images, the absences and empty spaces mark these poetic objects as the essence of the object. The play of metaphor and metonymy is up to the reader.

Absence pervades Alan Caitlin’s poetry, and without getting involved in complex digressions, these absences become apparent in both the formal designs I described above as well as the expressed content of the poems. In “Modern Art,” we read of the ravages of World War I and the ways these horrors changed both the form and function of art. Absent are the proper names of those represented by the pronoun that begins each stanza. There is no way to be certain that “their” refers to the war dead, the modern artists, or the works of art.

“Modern Art” appears to list the ways the so-called Great War evacuated life of the grand ideals onto which art was sutured in order to take on lasting significance. Ideas like “progress,” “Nation,” and even “God” are lost after the devastation, and the meaning of art itself has become ephemeral. What we are left with is the fleeting presence against the absence of all that was lost:

Their absence is briefly noted, heard as

a message on airwaves or written of

in newsprint, filmed for international TV;

their names are scrolled in silence at

the end of telecasts; mourned or not,

they have made a mark.

At last, they have made a mark—a trace on the blank spaces of the white noise of television and electronic reproductions of the work of art and the artists themselves. It is as if the imagist poem is all that retains the fleeting images of what is left after grand meanings are lost. The flood of media-generated images is revealed to be a meaningless cacophony while the essential image remains embedded in our imagination.

It is too easy to characterize Alan Caitlin’s poem as bleak. While it is true that the images captured in his sparse poetic language are often dark, what I found powerful about this collection was the way the visual is captured in poetic language. Again, you are not going to find much to be happy about in these poems. What you will find is a stunning poetic maneuver in which the thing before your eyes is, in fact, the thing that is not there at all. A short poem, “Wladyslaw Szpilman, ‘The Pianist’, with his siblings, 1914” stands out as exemplary:

This is the Real Lost Generation:

Warsaw Jews in their youth,

posed for a studio portrait,

when anything was possible but

Looking at the portraits of people in their youth who we know were lost to the Holocaust, we witness the substance of the imagist rendered only in the form of that which evacuates the image of its content. Alan Caitlin performs this magic throughout this Asylum Garden: after Van Gogh. Since the poems do deal with matters that cannot be sugar-coated, it seems fitting that loss and absence should surround all that is explicitly named. Like Van Gogh himself, who struggled all his life to render the living movements of objects more than objects themselves, Cailtin’s poetry asks us to pay more attention to what the poem does than what it means.