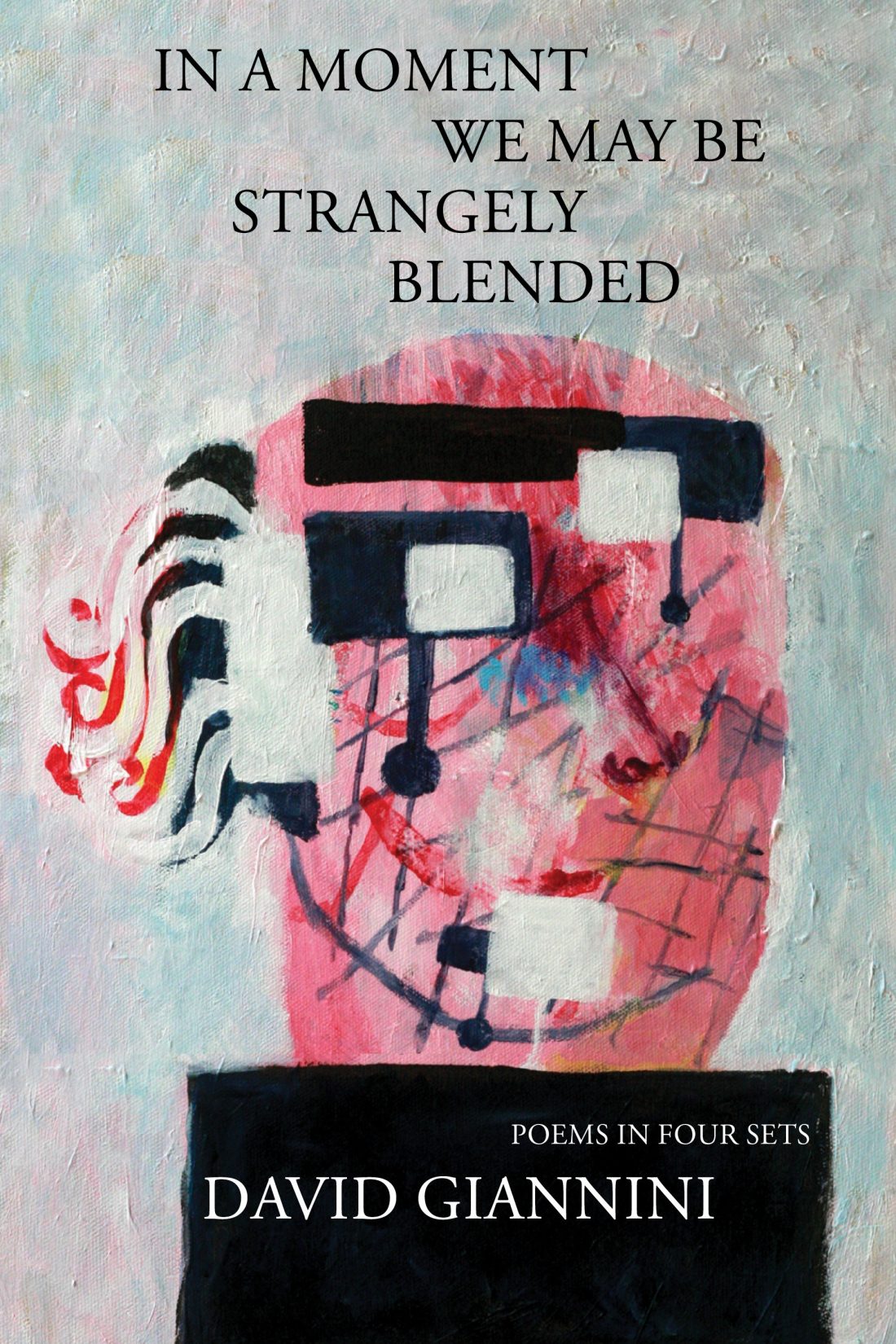 David Giannini’s originality as a poet becomes immediately evident within the title of In a Moment We May Be Strangely Blended. As I’ve noted before in these pages, Giannini is masterful at creating double meanings and strategic word play. Here, the title can have at least two meanings, and they both illuminate time’s various meanings, another of Giannini’s recurrent interests. First, in the next moment about to happen, we may be strangely blended. Second, we may be strangely blended within a specific moment and for that moment’s duration, however long it may be. These possibilities demonstrate the poet’s skill in exploring language’s potential for creating and allowing multiplicities of meaning and interconnection. All verbal artists recognize this quality of language. The best of them are able to direct this energy into dynamic and memorable writing.

In this collection Giannini achieves all this through his patterns of merging, connecting, conflating, and interconnecting his subjects. For Giannini, words themselves often become personified agents, wielding the substantial power to blend, align, and link thoughts and things. This is clear in “Process At the End of Winter,” where we see a continual movement from one associated condition to the next—winter into spring; night to dawn; fire to ash and back again. But I believe the poem discloses its true beauty when “images and phonemes” take over the action in this moment of self-awareness:

… and I could argue and bargain
over acreage in my mind,
disputing my internal survey
of trees, cracked stones, and animals
inside me, images and phonemes
coming to call, less like neighbors
at the door, more like bees
after a bear swats the hive
and is stung.

“Heavy Lifting” also treats language as an agent exerting its own substantial power. In this case, the very shapes of questions, and their answers, and their punctuation, all create a distinctive contour of thought. The poem appears to pivot, as it were, on the discovery of an answer configured as an insect:

Today when I was running turning
questions upside-down, inverting
all question-marks, balls on top, hooks
below, I saw at once they were waiting to lift,
cargo from the ship’s hold.

Container after container hauled up on deck,
but all I found was the desiccated insect
of an answer once able to fly, or at least to twist
as an ampersand connecting space
between a laugh & a grimace.

Artfully conflating various figures, these lines become a metaphor for the act of thinking itself. Additionally, the “ampersand connecting space” points to Giannini’s way of linking his poems across several sections of the book. Part One concludes with a poem called “Good Ruin”: its last line—“yes, the dog of hope”—reappears as the title of Part Two, which is “Dog of Hope: Historical Twists.” In fact, three of the four parts of this collection are linked together in this manner, adding another layer of cohesion to Giannini’s themes and overall design.

One of these themes is the past’s elisions with the present, and the future’s ability to absorb them both. For instance, “Three Notes, One Wind” depends on the comingling of historical eras. The poem begins by recalling the burning of the Alexandria Library in 48 BCE. The poem then transitions to the ugly events in Charlottesville in 2017, that scene of “injury / death, and the wind in its long running.” The final stanza appears to double back in time, referencing Bosch’s painting, “Garden of Earthly Delights.” But that famous artwork is configured as a pinata in our continuous present, with wind rising again: “here are children of the wind, waiting with their bats…” What connects these moments is destruction’s blunt force. The pinata is the least violent of them, but it’s an image of force all the same.

A similar sentiment propels “For the Students (and All) Who March Against Gun Violence.” The first stanza, titled “1956,” recalls a memory of children playing with toy guns: “we felt they were beautiful then.” The next and final stanza, “2018,” opens with these words: “A deadly silence has been living too long / in the corridors of power.” I don’t often care much for overtly political poetry, but Giannini balances this terrible subject with exacting power: what was once just childish gunplay has become for every American today our own imagining of the too-many places where actual gunfire now takes human lives with numbing frequency: “in crowds, churches, synagogues and / mosques, streets of our cities, schools, and our / intimate rooms.” In short, this poem also interconnects past and present, along with all manner of human places. They’re each in their own way sacred, and each deserves a renewed show of safety and decency.

Part Four, “Memorials, Plus,” features one of Giannini’s best poems in this collection. Concluding the book, “Request” concerns mortality, and it speaks to the poet’s desire for cremation. Most evidently, the poem signifies the writer’s full awareness of the past, present, and his inevitable future. “Request” is also a fine nature poem, but notably the first stanza describes a resistance to any sort of physical blending after death:

I don’t want my skull
pelted by termites
shaken from their logs
by bears.

Burn it
with my skeleton
and organs to fine ash.

Giannini’s “Request” speaks to me quite well: I recently determined to be cremated—many years from now, I hope—and there is something reassuring in knowing that my own body won’t be targeted by hungry insects when I’m gone as well. For his part, Giannini concludes this final poem with a lively set of requests, one for the fate of his own poetry, and the other for his expected final resting place. What at first glance appears to be grim resignation to the indifference of nature and time becomes instead a joyful affirmation. It’s another reminder of why it’s always a pleasure to read David Giannini’s exceptional writing:

Please give my poems
to the weathers
and let others gnash the lines
with panthers’ teeth.